How will JobSeeker changes impact the property market?

With the temporary supplement to JobSeeker payments set to finish in March, what impact could this have on the housing market?

This week, the Federal government announced a permanent increase to the JobSeeker base rate by $50 a fortnight, effective from 1 April, taking the total fortnightly rate to $615 from the current $565.70 figure, or $43.57 a day.

The $3.57 daily increase is lower than the current payment that includes the temporary $150 a fortnight 'coronavirus supplement', which is set to cease on March 31.

The JobSeeker coronavirus supplement was introduced in early 2020 in response to the COVID-19 pandemic for new and existing welfare recipients, set at an additional $275 per week, which virtually doubled payments for some recipients.

The recent $50 increase came under fire, with welfare recipients $250 worse off compared with what they were receiving at the onset of COVID-19.

How could this impact the housing market?

CoreLogic's Head of Research Eliza Owen said it's important to acknowledge that the JobSeeker supplement has already been significantly reduced in recent months with no apparent negative impact on the housing market.

"However, housing market momentum has increased from September to January, amid the reduction in the supplement.

"Between the end of September and January, the CoreLogic national home value index rose 3.2%, and rental values increased 2.5%." 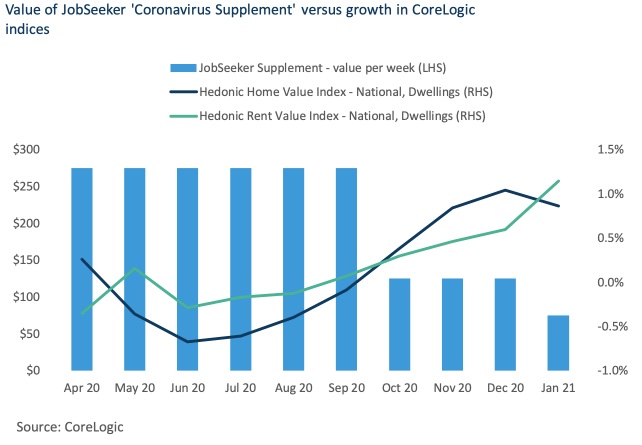 The housing market has been picking up speed, with house prices rising by 0.9% in January marking the fourth consecutive month of increases according to CoreLogic.

The momentum in the housing market has led experts to make optimistic house price prediction forecasts.

Westpac recently forecast a 20% rise in property prices over the next two years, while Commonwealth Bank predicted prices to lift 16% by 2022.

Ms Owen said another positive sign is that even as the JobSeeker coronavirus supplement has been wound back, fewer Australians have been reliant on welfare payments.

Recent data released by the Australian Government Department of Social Services (DSS) suggests there were 11.7% fewer JobSeeker recipients toward the end January 2020 compared with the end of September.

Now, about 1.2 million Australians are still on the payment.

Meanwhile, data from the Australian Prudential Regulation Authority (APRA) released in January shows that at the end of December, the value of deferred home loans fell by $7 billion to $43 billion.

That's a significant drop from May when home loan deferrals peaked at $192 billion, and the current value of deferred housing loans is over 80% down since then. .

ANZ data shows 84% of deferred home loans have rolled off with 98% returning to repayment, with only 1% of its home loan customers still receiving COVID support.

Despite this, Ms Owen said there is "still a heightened risk to wider-spread housing stress, as the number of JobSeeker recipients in January was still 55.9% higher than at the onset of COVID-19 in March 2020".

Ms Owen said the recent changes to the permanent rate of JobSeeker payments are unlikely to have a direct impact on house prices, as most lower income households receiving JobSeeker are more likely to be renting.

"This would imply an indirect impact on housing prices, where reduced rental return could impact an investor’s willingness to pay for a property," Ms Owen said.

"However, even looking at regions with the highest proportion of JobSeeker recipients in Australia relative to the local population, rental outcomes have been mixed since the significant reduction of the Jobseeker supplement in September."

This can be seen in the table below which looks at changes in rents since September 2020 through to January 2021 in property markets that have the highest proportion of JobSeeker recipients.

Despite high portions of populations receiving JobSeeker payments, rental values only declined in one region while all other areas saw an average increase in market rents of 4.2%.

This is above the 2.5% increase in rent values nationally over the same period

"What this data does highlight is that the impending changes to JobSeeker could create increased divergence between incomes and housing costs for some of Australia’s most vulnerable households," Ms Owen said.

"While these rental markets may be increasing in aggregate, housing stress, and even homelessness, may be faced by individuals whose livelihoods have been impacted by COVID19.

"While changes to JobSeeker are unlikely to impact the housing market, the welfare reduction could greatly disrupt housing situations for many."

The Anglicare Rental Affordability Snapshot in September last year found if the unemployment payment was cut to the old rate ($40 per day), then just 13 properties (0%) would be affordable to rent nationwide for those on it.

Given the daily increase is just $3.57, that number is probably very similar now.