Customer-owned banks (aka mutual banks) have emerged from a tough 2019 relatively unscathed, according to a new independent report from KPMG.

The KPMG Mutuals Industry Review 2019 found customer-owned banks grew their residential lending by 7.3% and their deposits by 8.5% in the past year.

Compared to a recent analysis of the big four banks by the same institution, the majors grew their mortgage books and deposits by just 1.8% and 2.4% respectively, with that report stating “the changing competitor landscape, including the rise of international banks, challenger banks and non-bank lenders, is continuing to take residential mortgage market share out of the majors”.

Total assets of mutual banks grew by 4.3% to $9.2 billion, with KPMG’s report stating a focus on the customer experience and technology streamlining innovations led to their great performance – although operating profit before tax fell by 6.1%, reflecting these increased costs and a squeeze on their net interest margins.

“Coupled with this, the industry is also feeling the impact of technological innovation, new sources of competition and evolving customer preferences.

“The backdrop to all of this is a broader financial services industry that is facing unprecedented political, regulatory and media scrutiny.”

Going forward, Mr Twining said successful mutual banks will be those that can transform the business around their customers while also staying strong in the face of competitive and regulatory changes.

“Banks now operate in an environment where doing much of the same thing year on year cannot maintain ‘status quo’. Rather, transforming simply, efficiently and with a focus on the customers’ needs is required,” he said.

“This will also be important to achieve compliance in this environment of significant regulatory change.”

“Australia’s customer-owned banking institutions have always existed to put the interests of their customers and the community first,” Mr Lawrence said.

“The strong performance of Australia’s credit unions, mutual banks and building societies is a clear sign that consumers want to bank with an organisation that puts them first.

“These strong results are impressive when you consider the backdrop of the past year which saw interest rates drop to historic lows, the release of the Financial Services Royal Commission Final Report and a suite of regulatory reforms.”

Mr Lawrence also said the pace and scope of regulatory changes from the royal commission is constraining investment growth for mutual banks.

“We urge regulators, MPs and other policymakers to think twice about adding new laws and regulation and instead focus on enforcing the existing laws.”

As things stand at the moment, the big four banks still hold around 81% of the home loan market, according to KPMG.

Overall, the sector comprises 2.6% of all assets across all authorised deposit-taking institutions (ADIs).

Who are the biggest mutual banks?

The 10 largest mutuals banks by total assets can be seen in the infographic below – there are no changes from 2018, with each of the top 10 maintaining their spots. 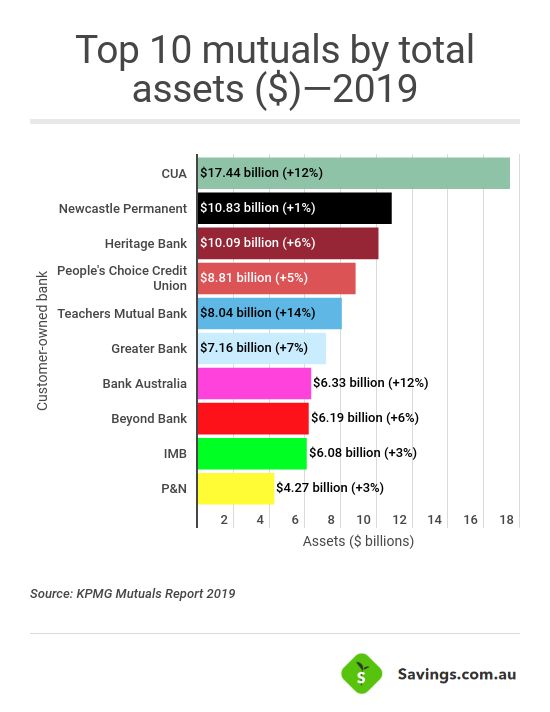 Deposits continue to be the biggest source of funding for mutual banks, but the growth in deposits across the entire industry has been severely impacted by the sustained low interest rate environment.

According to the report, pressure on margins (the difference between home loan interest rates and deposit interest rates) is continuing to be squeezed, and with quantitative easing potentially on the horizon, mutuals will need to consider how they’ll respond to further changes in monetary policy.

There’s another rate cut expected to occur in February next year, which would take the cash rate to 0.50%.

Term deposit rates across the board are already extremely low, with some at near-zero.