Australian property prices were forecast to crash spectacularly this year but didn't. So what happened?

Despite overblown fears of massive house price drops (some had been forecasting a 40% plunge), property prices only fell marginally during COVID and are now beginning to rise nationally.

According to CoreLogic data, housing values only fell by 1.9% nationally between March and September, before moving into a recovery phase, increasing by 0.4% in October and 0.8% in November.

Meanwhile, house prices have risen 1.1% in the three months to November, recovering over half the value lost to COVID-19. National house prices are now sitting just 1.2% below the record high values reached in October 2017.

Compared with previous housing market downturns, this one seems relatively mild with property values only 0.7% below pre-COVID levels.

"There are numerous factors which have contributed to the prevention of a larger downturn in dwelling values including the institutional, coordinated response to the pandemic, which has seen low borrowing costs, added incentives for first home buyers and the extension of mortgage repayment deferrals limiting forced sales," said Eliza Owen, CoreLogic’s Head of Research Australia.

The cost of borrowing money has a major impact on property values and nowhere has that been more apparent than this year. In 2020, the Reserve Bank of Australia (RBA) lowered the cash rate three times to a historic low of 0.10%.

Alongside the rate cut, other measures were announced, most importantly the reduction in the yield target on 3-year government bonds from 0.25% to 0.10%; and a reduction in the interest rate of new drawings from the term funding facility (TFF) to 0.10%.

If that just went right over your head, basically it just means that the RBA has made it cheaper than ever for banks to lend money - leading to record low mortgage rates.

"The low cash rate setting, which may be in place for years to come, will likely cause housing values to rise," Ms Owen said.

"This relationship has held up historically, with RBA research previously suggesting that a 100 basis point reduction in the cash rate can lead to an 8% increase in property values over the following two years.

This is supported by the chart below, which shows the cash rate alongside the monthly change in dwelling values across Australia.

"Periods of cash rate target reductions often coincide with, or are closely followed by, periods of growth in dwelling values," Ms Owen said. 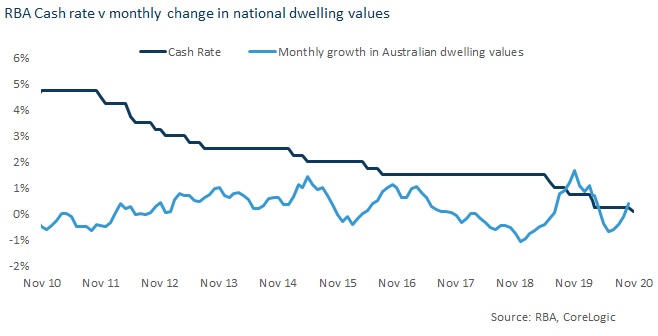 Ms Owen said it's not uncommon for property prices to rise during periods of rising unemployment or economic downturn.

"This is because the monetary response to rising unemployment and falling consumption is often to lower the price of debt. Those that still have a secure income during these shocks may be more inclined to borrow and buy as a result."

That seems to be exactly what's happened with first home buyers.

The record-low interest rate environment combined with other incentives like the First Home Loan Deposit Scheme, which was extended in October, has driven a 35.1% surge in first home buyers in the year to October.

"There are several factors that contributed to this growth in first home buyer activity, including generational trends, monetary and fiscal incentives and lower dwelling values and competition," Ms Owen said.

In March, the banks announced they would be allowing financially impacted customers who can no longer afford their mortgage repayments to defer them for six months.

That support was then extended until March 2021 until which time deferred repayment plans in response to the pandemic would not be treated as loans in arrears.

"In the case of large-scale mortgage debt, ongoing arrears can lead to forced sales, which in turn fuel risks associated with higher supply in the housing market, lowers values, and higher rates of negative equity, where the borrower sells their property for less than what they owe the bank," Ms Owen said.

"Mortgage repayment deferrals have acted as a temporary stopper on this vicious cycle. Those that did not want to sell amid economic uncertainty due to an inability to repay their mortgage, did not have to."

This contributed to low levels of properties up for sale, which insulated property prices.

Unlike previous recessions, many of the job losses from this recession were contained to particular industries and demographics.

COVID-19 has impacted young people the most, and those who work in sectors like hospitality and retail where people are more likely to rent.

According to CoreLogic, even though workers aged between 15 and 24 only averaged 14.9% of employed people in the lead up to COVID-19, they made up 24.4% of job losses from March to October.

"While the economic and social costs of these job declines are devastating, many young workers, or those in precarious job sectors, are less likely to have mortgage servicing obligations," Ms Owen said.

The chart below shows that those working in the hospitality and food industries have been most impacted by job losses during COVID. 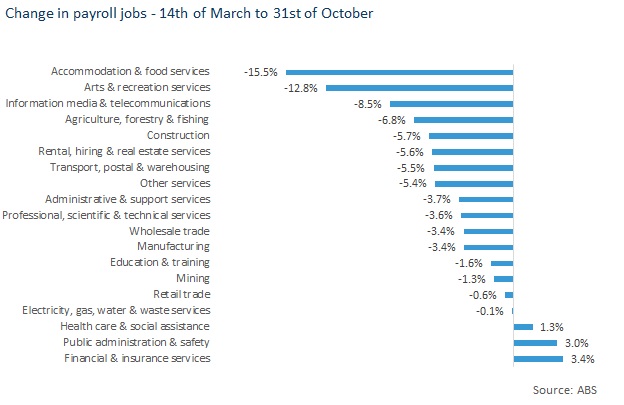 "Those working in this industry are less likely to have mortgage debt," Ms Owen said.

"The decline of employment in these sectors likely contributed to severe pockets of rental income decline, but the investor servicing debt may be able to hold on to the asset while it is temporarily vacant."

However, it's important to note that falls in rental income can impact property values.

"This is because potential investors factor rental income into the purchase price of a property," Ms Owen said.

House prices are expected to continue rising next year, with some experts tipping double-digit rises.

Buyer's agent platform BuyersBuyers.com.au has predicted property price rises of between 8-12% for Sydney and Melbourne, while Brisbane and South East Queensland could see values rise between 6-10%.

Meanwhile, ANZ bank has forecast gains of 9% nationally in 2021, with Perth to be the strongest performer at 12% price growth.

Similarly, SQM Research has predicted values to rise by 5-9% nationally but only if the cash rate remains unchanged, the quantitative easing (QE) program is expanded, a third COVID wave is contained and a vaccine rolled out, as well as JobKeeper being extended.

BetaShares chief economist David Bassanese said the RBA's pledge to keep interest rates on hold until inflation is back within its 2-3% target range could be tested next year with a potentially large rebound in house prices.

"Our modelling suggests that national home loan affordability is at its best level in 18 years (March 2002), thanks to the overall decline in house prices relative to household income over the past three years and, perhaps most importantly, the substantial reduction in mortgage rates," Mr Bassanese said.

"What we know from history is that when mortgage rates drop, new home buyers don’t just pocket the savings – they simply bid more for properties as their affordability limit has improved.

Helping support a likely lift in house prices, moreover, is the RBA’s commentary that they will not to lift interest rates for up to three years – or not before there’s been a notable rise in consumer price inflation into the 2 to 3% target band. In other words, based on current RBA guidance, home buyers generally face little risk of a threat to current low affordability levels for some time."

Photo by Slava Abramovitch on Unsplash