New research from Roy Morgan shows levels of 'mortgage stress' fell to near record lows during the COVID-19 pandemic, mainly due to mortgage deferrals offered by lenders.

According to Roy Morgan's research, in the three months to August 2020 there were 751,000 mortgage holder (20.2%) experiencing mortgage stress.

This is near the record lows of a year ago when only 723,000 mortgage holders were considered 'at risk' in October 2019.

Meanwhile, 12.5% of mortgage holders were deemed 'extremely at risk', a slight increase from around 10% last year.

Roy Morgan considers someone to be at risk of mortgage stress in two ways:

People are 'at risk' if their mortgage repayments are greater than 25%-45% of their household income (depending on their income and spending), while they're considered 'extremely at risk' if the 'interest-only' component of their repayments is over that portion of income. 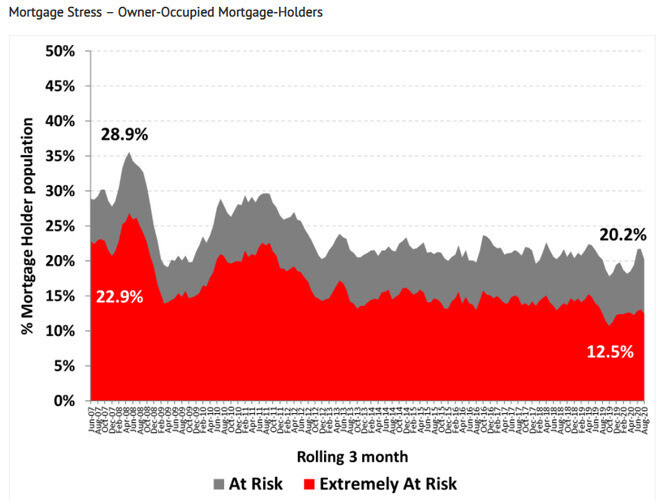 Roy Morgan Chief Executive Michele Levine says the support provided by both the Federal Government and financial institutions have either prevented or put off a potential real-estate crisis.

"The latest Roy Morgan data into the Australian housing market shows mortgage stress was near record lows in the three months to August 2020 as most of Australia, apart from Victoria, was emerging from nation-wide lockdowns implemented through March-May 2020," Ms Levine said.

"However, these figures are somewhat deceptive as they rely on an unprecedented level of support provided to the economy.

"The Federal Government has subsidised workers with the $1,500 a fortnight JobKeeper wage subsidy, the almost doubled JobSeeker payment of over $1,100, and allowed businesses to trade while insolvent this year to keep people employed."

According to Australia's prudential regulator, banks deferred as much as $195 billion worth of housing loans as of August 2020, representing 11% of the total home loan market.

According to regulator figures, 90% LVR home loans and interest-only loans have higher rates of deferral, and Ms Levine said borrowers with these loans are more likely to experience mortgage stress if they became unemployed or fall upon hard times.

“Because of these measures the impact of COVID-19 is yet to be fully felt, but we already know there will be significant pressures emerging when the support ends," Ms Levine said.

“Over the many years of our research into mortgage stress, the data shows clearly the loss of a job is the biggest driver of increased mortgage stress as the reduction in income causes an immediate jump into a ‘risk’ category.

“JobKeeper has already been reduced in early October 2020 and is set to end entirely by April 21 while the mortgage deferrals offered by banks to customers in financial distress are set to run out at the same time," Ms Levine said.

For such people, 26.7% are now in ‘mortgage stress’ – over 6 percentage points higher than for all mortgage holders. 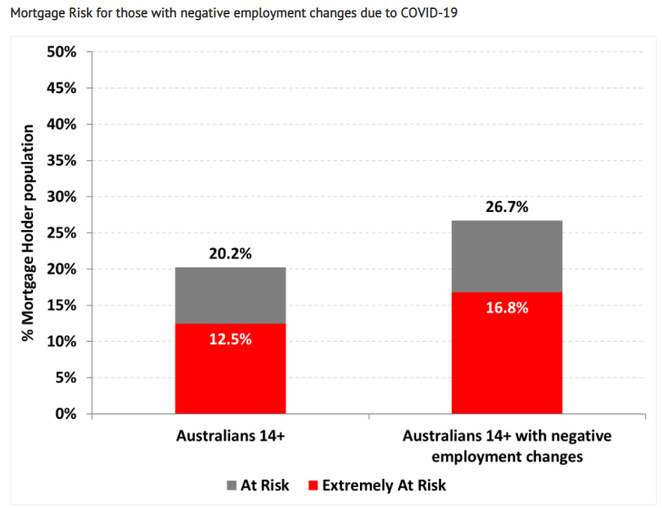 Roy Morgan's findings are in contrast to Digital Finance Analytics' (DFA) reports, which suggest overall levels of mortgage stress are still close to record highs, although it should be noted DFA used a different definition for mortgage stress.

DFA measures mortgage stress purely in cash-flow terms: if cash flow is close to zero (money in minus money out, including mortgage repayments), then a household is in stress.

Meanwhile, young growing families (which include first time buyers) are the most exposed, recording mortgage stress levels of 73.5% on average.

Regardless of the numbers, stress levels are likely to rise once income support and mortgage holidays end next year. 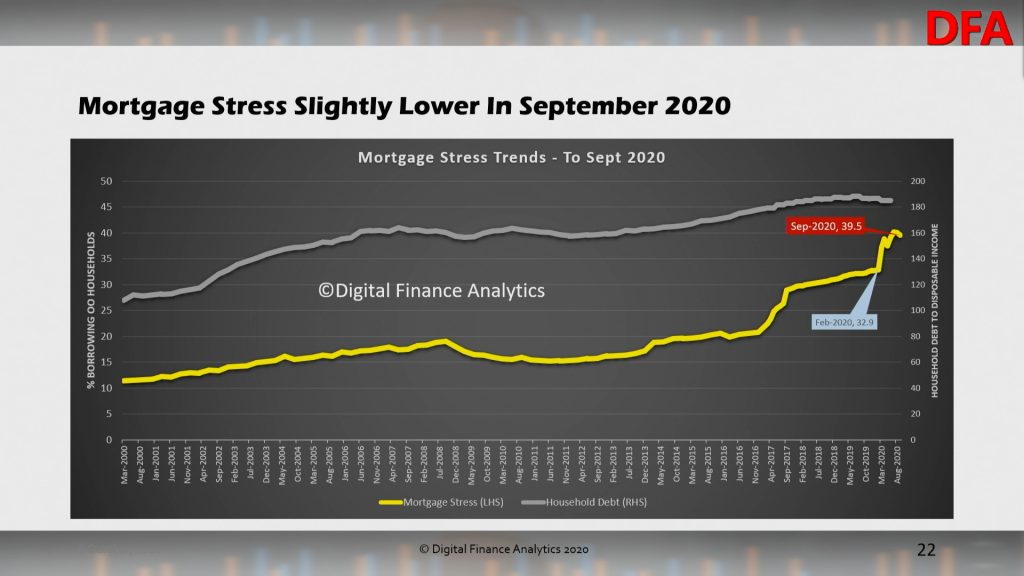