"The slowdown in housing value appreciation is unsurprising given the rapid rate of growth seen over the past six months, especially in the context of subdued wages growth," Mr Lawless said.

"With housing prices rising faster than incomes, it’s likely price sensitive sectors of the market, such as first home buyers and lower income households, are finding it harder to save for a deposit and transactional costs.” 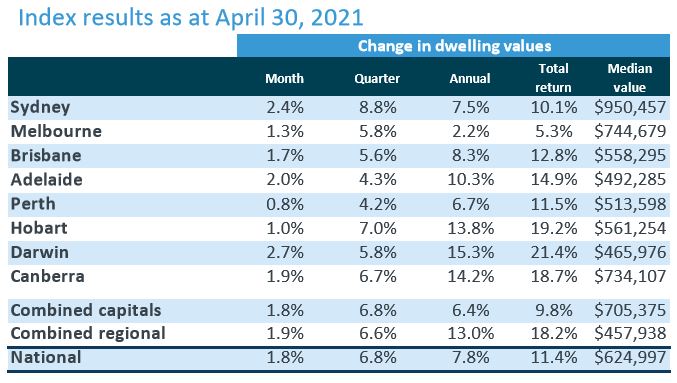 While April's figures are a sign that house prices could be coming off the boil, property values are still rapidly rising, up 6.8% over the last three months to be 10.2% higher than the COVID-low in September.

According to ANZ, April's rise in house prices is still the third largest rise recorded since the late 1980s.

There is already evidence that first home buyers are getting squeezed out of the market again, with ABS data showing a -4.0% fall in the value of first home buyer loans through February after eight months of consecutive gains.

Over the month of April, the trend of houses outperforming units continued as high density living fell out of favour, with buyers preferring more space.

“A preference shift away from higher density housing during a global pandemic is understandable, however a rise in flexible working arrangements also seems to be supporting greater demand for houses around the outer-fringes of capital cities," Mr Lawless said.

Another sign the steam may be coming out of the market is the number of fresh listings being added to the market.

According to CoreLogic over 40,000 new property listings were added to the market nationally over the month of April - 14% above the five year average.

Mr Lawless said the rise in new listing numbers is a sign vendors are more confident.

“More homeowners are taking advantage of strong selling conditions while they remain skewed towards vendors rather than buyers," he said.

"Total advertised stock levels were 25% below the five year average in late April. Such low total listing numbers, at a time when new listings are above average, reflects the strength of buyer demand, fueling the current rapid rate of absorption.

“Prospective vendors are likely becoming more motivated to test the market thanks to such strong selling conditions as well as housing prices pushing to new record highs in most areas."

Mr Lawless said while the housing market remains strong, the current rate of house price growth isn't sustainable and all signs point towards a slow down.

"There are mounting signs the housing market has moved through a peak rate of growth. Growth conditions over the past six months have been unsustainable and are now succumbing to a gradual slowdown in demand due to worsening affordability constraints, a rise in fresh inventory, higher levels of new detached housing supply and less government stimulus," Mr Lawless said.

"We are expecting housing values will continue to rise throughout 2021 and into 2022, albeit at a gradually slower pace.

"Demand should be supported by an expectation that mortgage rates will remain at their record lows for an extended period of time, as well as ongoing high levels of consumer confidence as the economy expands at a faster than average pace."