Westpac's monthly consumer confidence index has increased by 1.9% in February, from 107.0 in January to 109.1 in February.

"As such, the decline in recent months suggests recent increases in house prices may already be starting to weigh on the purchasing sentiment," Mr Evans said.

"This ‘affordability’ factor is apparent in the age group breakdown, with buyer sentiment much weaker amongst the 18–24 age group than in other age groups.

"Consistent with this evidence of a perceived ‘squeeze’ on affordability is the 6.5% lift in the Westpac-Melbourne Institute Index of House Price Expectations.

"The index is now at a seven year high and 2% above its pre-pandemic level."

Evidencing a rapid turnaround in the Victorian economy, the house price expectations index there rose 13.7% in February, almost double that of New South Wales (NSW).

It's the first month since March of last year the Victoria index has sat above the NSW index.

The increase in consumer confidence in February means around half the loss seen in January when the index fell from its ten-year high in December has been recouped, and now sits 14.2% above its pre-COVID level in February. 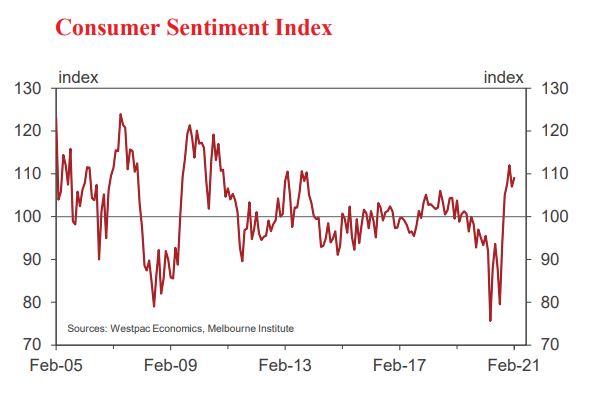 Mr Evans said the data demonstrates consumers were still extremely confident, which was critically important for the economy at this juncture.

"The Federal government is scheduled to phase out the JobKeeper program at the end of March," Mr Evans said.

"It is vital that households, which have built up a very large financial buffer through the pandemic (recently estimated by the Reserve Bank at $200 billion or 15% of pre-pandemic annual income), are prepared to now use that buffer to partially offset the impact on the economy of the withdrawal of support programs.

"No doubt the management of the pandemic locally has had a constructive effect on confidence."

The Reserve Bank's decision to extend its quantitative easing program, as well as the news unemployment is likely to have peaked may also have contributed to increased confidence.

Victorian consumers were the most confident in the country, after successfully managing the pandemic, while outbreaks in Queensland and Western Australia saw confidence tumble.

Confidence among young people (aged 18-24) declined slightly in the month, while older age groups saw increases of up to 21%.

"Part of this under-performance from the younger age group may reflect a less enthusiastic response to vaccine developments," Mr Evans said.

He added the survey suggested younger people may be having a more difficult time financially, with youth unemployment at 13.9% compared to the official 6.6% unemployment rate.

"Limited employment opportunities, weak wages growth, and concerns about the affordability impacts of a renewed rise in house prices may have weighed disproportionately on younger Australians over the last year," Mr Evans said.

However, the survey's unemployment expectations fell by 3.8%, the lowest print since May 2011, meaning fewer respondents expect an increase in the unemployment rate.

Photo by DJ Paine on Unsplash