Australian home prices rose 1.0% in December, the third consecutive month of increases, according to CoreLogic.

CoreLogic's Head of Research, Tim Lawless, said forecasts of values dropping by over 30% did not come to fruition, with the year instead characterised by volatility in transactions.

"The number of residential property sales plummeted by -40% through March and April but finished the year with almost 8% more sales relative to a year ago as buyer numbers surged through the second half of the year," Mr Lawless said.

"Despite the volatility, housing values showed remarkable resilience, falling by only -2.1% before rebounding with strength throughout the final quarter of 2020.

“Record low interest rates played a key role in supporting housing market activity, along with a spectacular rise in consumer confidence as COVID-related restrictions were lifted and forecasts for economic conditions turned out to be overly pessimistic." 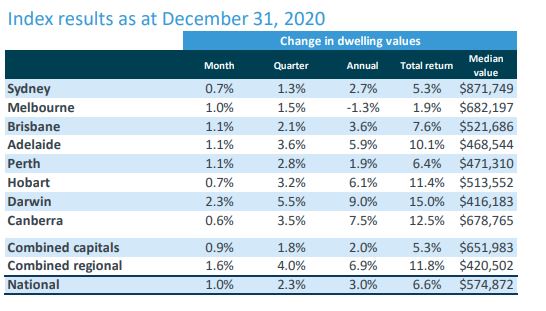 The surge in regional values was driven by the shift to working from home, which saw demand outstrip supply as people looked for lifestyle properties and lower density housing.

Despite the housing market gathering pace, four of the eight capitals are recording values below their previous peaks.

Low inventory levels were a feature of the housing market last year, with total listings peaking at the end of November at around 165,000 properties for sale.

This was 18% lower than the same period last year and 22% below the five year average for that time of year.

Mr Lawless said listed properties were being snapped up quickly, as there were simply far more active buyers than new listings coming onto the market.

"Despite new listing numbers being consistently lower relative to their 2019 levels, the estimated number of home sales were almost 8% higher though 2020 compared with the 2019 calendar year," he said.

"This imbalance between effective supply and demand is another factor that has supported a rise in housing prices as a sense of urgency returned to the market.

"With home buyers outnumbering sellers, most areas around the country represent a seller’s market.”

Across the capitals, the median number of days on the market has reduced from a recent high of 43 days over the three months ending July to 33 days through the December quarter.

Vendors are also discounting their asking prices by a smaller amount, with the discount reducing from 3.6% to 2.8%.

Both geographically and across housing types, rental conditions diverged substantially in 2020.

Geographically, Darwin and Perth have seen house rents up around 10%, and unit rents are up 7.6% and 6.8% respectively.

“Both Perth and Darwin have recorded below average levels of investor activity since housing market conditions started to cool in mid-2014 which has led to a shortage of rental stock," Mr Lawless said.

Despite this strong performance, Perth rents remain 10.4% lower than the previous peak in May 2013 and Darwin rents remain almost 20% below their 2014 peak.

The Melbourne and Sydney unit markets tell a different story, where weak demand, high supply, and stalled overseas migration has driven a sharp drop in rents.

Mr Lawless said these weak rental conditions were likely to persist until overseas migration ramped back up and the higher levels of supply were absorbed.

Photo by C.Valdez on Unsplash