House prices increase at highest rate in 17 years in February Australian home values spiked 2.1% higher in February according to CoreLogic, the largest month-on-month change since August 2003.

Housing values are rising across every capital city and rest-of-state region, and CoreLogic research director Tim Lawless said the country was in the midst of a broad-based boom.

“The last time we saw a sustained period where every capital city and rest of state region was rising in value was mid-2009 through to early 2010, as post-GFC stimulus fueled buyer demand," Mr Lawless said.

Demonstrating their rebound, Sydney and Melbourne were some of the strongest markets in February, rising 2.5% and 2.1% respectively.

Mr Lawless said it was unclear whether the rebound could be sustained.

"Both cities are still recording values below their earlier peaks, however at this current rate of appreciation it won’t be long before Australia’s two most expensive capital city markets are moving through new record highs.

"With household incomes expected to remain subdued and stimulus winding down, it is likely affordability will once again become a challenge in these cities.” 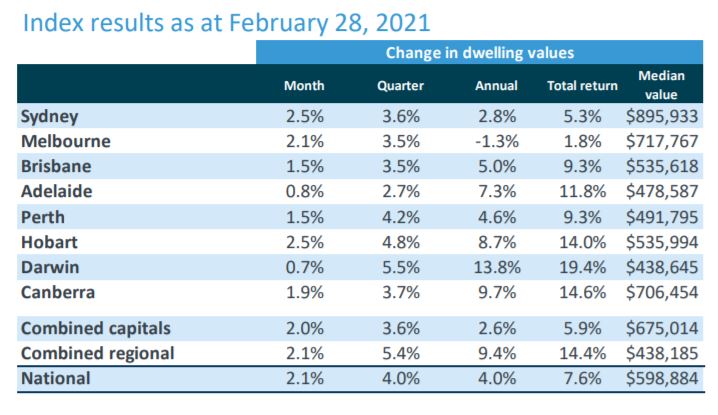 Regional values continued to outpace the growth of capital city markets in February, however the margin has narrowed, with regional markets up 2.1%, only 0.1% ahead of the capitals.

One of the main factors driving housing prices higher is low advertised supply levels, as the number of properties advertised for sale nationally remained 26.2% below 2020 levels over the 28 days ending February 21.

However, while available supply remains at historically low levels, the quarterly number of home sales is estimated to be up 35.3% from 2020.

Mr Lawless said the mismatch between supply and demand was a central factor to pushing prices higher.

“Housing inventory is around record lows for this time of the year and buyer demand is well above average. These conditions favour sellers," he said.

"Buyers are likely confronting a sense of FOMO which limits their ability to negotiate."

“Serious buyers would be well advised to have their financing pre-approved and be ready to act fast in order to secure a property under such tight supply conditions.”

There is extreme disparity in the rental market according to CoreLogic.

Tight rental conditions in Perth and Darwin saw annual rental growth above 10%, whereas unit rents in Sydney and Melbourne have plunged 5.3% and 8.0% respectively.

“The strength in Perth and Darwin’s rental sector can be attributed to a mix of low supply, due to a recent history of low investor participation, and rising demand as interstate migration trends move into positive territory," Mr Lawless said.

"The opposite trends in Sydney and Melbourne have seen rental markets weaken; higher rental supply due to a recent history of investor exuberance, weaker demand from negative interstate migration and, more recently, a demand shock from closed international borders where Melbourne and Sydney were the primary recipients of migrant arrivals.”

The worst may be over for Sydney and Melbourne, with the rental index for Sydney recording two consecutive months of small rises, while Melbourne units edged higher in February after falling for nine of the previous ten months.

Photo by Phillip Flores on Unsplash