House rents 'set to soar' in many Aussie towns amid undersupply Photo by DJ Paine on Unsplash

Australia is experiencing the tightest housing supply conditions in more than a decade, according to new analysis.

Research from national buyer’s agency Propertyology reports that large parts of the country will soon face intense pressure on rents as the nation opens up and household incomes improve.

The firm's assessment of property market conditions found only four out of 52 major Australian cities had a residential vacancy rate of 3% or higher at the end of June.

A market with a balanced supply typically has a vacancy rate of 2-3%, while higher than 3% can tip the scales in the tenant's favour, which can cause a reduction in median rent prices.

Generally, a vacancy rate below 2% resembles a tight rental market where median rents would generally rise.

Five out of eight capital cities currently have vacancy rates below 2%.

“Right now, 39 out of 52 Australian towns (75% of the country) currently have an undersupply, nine locations have a balanced market, and the remaining four are oversupplied,” Mr Pressley said.

Mr Pressley said rental supply was a bi-product of the activity of mum and dad property investors.

“Large parts of Australia have seen several consecutive years of low volumes of properties purchased by investors," he said.

“Literally this week, the principle of a property management business told our buyer’s agents that they only have nine vacancies among a rent-roll of 1700. This situation is not unusual for most of Australia.”

According to Propertyology, rental markets from Wollongong to Coffs Harbour to Orange, and several other locations in New South Wales are facing pressure.

"Everything in Queensland from Toowoomba to Townsville has intense pressure right now," Propertyology reported.

"Almost every Victorian location outside of Melbourne, the entire state of Tasmania, and the rental market of every location in Western Australia is currently under pressure." 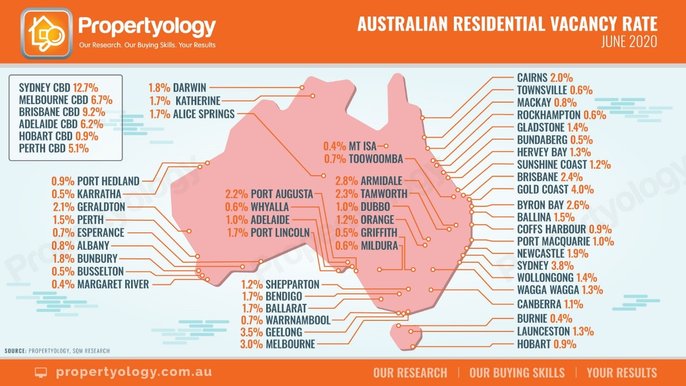 Mr Pressley said he’s never seen any situation in the last 25-years where so many Australian locations have vacancy rates so low, rental yields north of 5% and interest rates below 3.5%.

Meanwhile, Melbourne and Sydney appear to be in stark contrast to the rest of the country, both in a technical over-supply, with vacancy rates at 3% and 3.8% respectively.

Data from ANZ and Corelogic released last week showed rental values had fallen over 7% in some inner suburbs of the two state capitals since the start of the pandemic.

Advertised rental properties increased by 57% in inner Melbourne in the same period, while Sydney's city and inner-south both recorded a 53% jump.