Home / Compare Home Loans / What are the most affordable and liveable Australian suburbs in 2021?

What are the most affordable and liveable Australian suburbs in 2021? A new report has uncovered where buyers should look if they're searching for both affordability and liveability in the capital cities.

Some of the top suburbs for houses identified were Ferny Grove in Brisbane, Jannali in Sydney, Geilston Bay in Melbourne, and Kingston in Hobart.

For units, Coorparoo in Brisbane, Narwee in Sydney, Northcote in Melbourne, and Howrah in Hobart were some of the top picks.

Affordable and liveable suburbs, first half of 2021 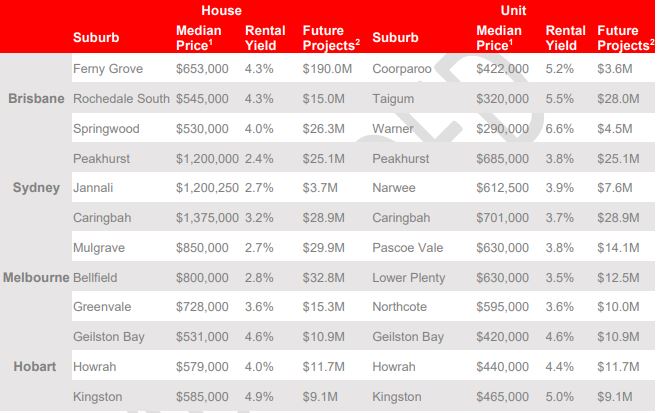 Affordability was judged by having a median price below a set threshold and by adding a percentage premium to the state's respective average home loan.

A higher rental yield, high level of future development, lower than average unemployment rate, low crime rates, and a minimum number of sales were also used to analyse the suburbs.

PRD chief economist Dr Diaswati Mardiasmo said despite having many suburbs with strong affordability and liveability, Sydney and Melbourne posed a risk to low and middle-income workers.

"Sydney and Melbourne continue to have the highest entry prices, with the lowest rental yields," Dr Diaswati said.

"This is a similar pattern to the 1st Half 2020 and 2nd Half 2020 reports, despite COVID-19 restrictions and further lockdowns in both capital cities."

Brisbane continued to be the capital with the best "bang for your buck" for both investors and owner occupiers, with Hobart starting to price out many home buyers.

"This carries a danger for local future first home buyers. Current first home buyers have recently been able to compete thanks to current Government schemes and a historical low interest rate.

"However, with the continuous increase in property prices and no significant supply relief, future first home buyers may be further disadvantaged."

The report analysed access to market, or price point sales, and found Brisbane and Sydney remained the most attractive capitals to first home buyers.

Melbourne has overtaken Hobart as the least friendly market for first home buyers, with an increasing number of Melbourne sales making up the middle, upper, and premium price brackets.

Despite its promising access to market and market activity, Dr Diaswati said Sydney remained the most expensive capital for both houses and units.

Sydney the most affordable city for liveability

PRD analysed affordability versus liveability in each capital city by finding the percentage difference between the state average home loan and the median unit and house prices in metro areas compared to suburbs within a 20 kilometre radius from the CBD.

It found Sydney to be the most affordable city for liveability, where residents could purchase a house in a liveable suburb for 87% less than the premium needed to purchase in Sydney Metro.

Dr Diaswati said the results may seem shocking, but were excellent news for prospective buyers.

"This is good news for first home buyers, who may believe they have to sacrifice liveability aspects in gaining access into suburbs with a lower median property price than Sydney Metro," she said.

"This finding may surprise many, as Brisbane and Hobart are originally thought of as the more affordable capital cities.

"Whilst this might be true from a median property price perspective, many affordable suburbs in both capital cities fail to satisfy other criteria such as liveability, investment return, and future project development plans."

Photo by Nico Smit on Unsplash