NAB: House prices to fall up to 15% despite improved outlook Photo by Yoann Laheurte on Unsplash

New data has reaffirmed NAB's view that house prices will fall between 10% and 15% from peak to trough.

The NAB Residential Property Survey saw housing market sentiment crash in the second quarter of the year, with the index falling to a survey low -33 points, compared to +38 in Q1.

All states saw a decline but the biggest impact was in Victoria and New South Wales, where prices and rents are expected to fall most in the next year.

NAB Chief Economist Alan Oster said the bank had not changed its view that the fallout from COVID-19 would see property prices sharply decline.

"While prices have held up slightly better than expected, they have now declined for two consecutive months across the capitals and we expect this to continue for some time yet," Mr Oster said.

"This easing in prices in Sydney and Melbourne comes after a very strong period in growth from mid-2019 where prices troughed."

Mr Oster said while there had been improved market conditions due to restrictions easing, a V-shaped recovery was unlikely.

"While the initial COVID-19 related restrictions on housing activity have eased, the economy has undergone a very large contraction, and while we appear to have passed the trough in activity, it will take time for the recovery to unfold," he said.

"The labour market fallout - and (the) consequent impact on households - will continue to play out over an extended period, which will likely see ongoing government support." 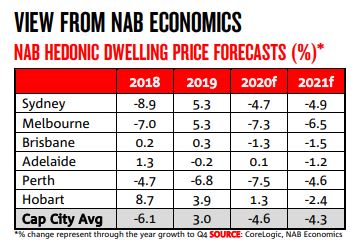 JobKeeper and JobSeeker to remain, RBA out of options

Mr Oster said he expected government support measures to remain in place past their September end date, which was vital for recovery.

"While the unprecedented support provided by the government will likely be wound back in the coming months, we expect support to continue in one form or another," he said.

"That could be a more targeted form of JobKeeper and the retention of a higher unemployment benefit somewhere between Newstart and JobSeeker levels."

In line with recent comments from the Reserve Bank (RBA), Mr Oster said the cash rate was unlikely to move for years, with negative rates extraordinarily unlikely.

"With inflation pressure unlikely to build for some time and a long way back towards full employment, the RBA will keep the exceptionally easy stance of monetary policy in place," he said.

"The focus will also continue to be on the flow of credit to the areas which need it, but beyond that it appears monetary policy has run its course for now - and we see very little chance of a move to negative rates any time soon."

At the beginning of the year house prices were set to skyrocket, but the pandemic put an abrupt stop to that.

NAB surveyed a panel of property experts to understand what would impact the housing market most going forward.

It found the biggest impacts would likely come from rising unemployment and job uncertainty (80%) and consumer confidence in general.

Around six in 10 also highlighted the difficulties for consumers in accessing finance and the end of government support payments such as JobKeeper and JobSeeker (60%).

Almost half highlighted the impact on demand from lower migration (48%).