Yesterday, the Reserve Bank of New Zealand (RBNZ) left its cash rate on hold at 0.25% but said it could increase the rate in 2022.

In Australia, Reserve Bank Governor Dr Philip Lowe has maintained that the cash rate here will stay at 0.10% until 2024, however some experts have predicted the RBA will drop this deadline before then.

"The Committee agreed to maintain its current stimulatory monetary settings until it is confident that consumer price inflation will be sustained near the 2% per annum target midpoint, and that employment is at its maximum sustainable level," Mr Orr said.

"Meeting these requirements will necessitate considerable time and patience."

"It signalled that the Official Cash Rate could start to rise from the second half of next year, much earlier than our forecasts suggest," he said.

"It expects a significant lift in wage growth, even as the unemployment rate struggles to move lower.

"We recognise that our point of difference with the RBNZ hinges on the degree of capacity in the labour market, something that’s inherently difficult to judge." 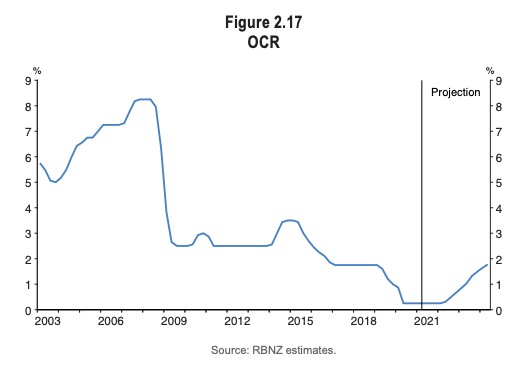 House prices also on the radar

RBNZ yesterday also highlighted house prices as one of its 'key factors' in its economic projections.

In March, RBNZ, which also acts as prudential regulator, introduced a variety of loan-to-value ratio (LVR) restrictions in an attempt to rein in its house price growth.

It has also stopped investors being able to claim mortgage interest as a tax deduction against rental income, while also tightening capital gains tax criteria.

"This slowdown is both larger and faster than expected in the February Statement," the Bank's statement said.

"This is due to the Government’s housing policy package announced in March that is assumed to reduce housing demand from residential property investors and support housing supply.

"No further significant house price increases are expected until the latter half of the projection, when moderate house price growth returns."

However, because of this, RBNZ is predicting a slowdown in 'consumption', also called the wealth effect.

"Consumption is projected to be weighed down by the impact of weaker house price growth on consumer confidence and wealth accumulation, although a more resilient labour market provides some offsetting support," the Bank's statement said.

Experts here have said Australia is 'unlikely' to follow New Zealand's path to rein in house prices, with price growth here comparatively low at 3.6% through 2020.

Photo by Martin Bisof on Unsplash