Australia's central bank has noted concerns around record-high property prices but insisted its focus is on bringing down the unemployment rate.

In a speech on Wednesday night, Reserve Bank (RBA) Deputy Governor Guy Debelle said monetary policy was not a tool that should be used to stem rising house prices.

"Monetary policy is focused on supporting the economic recovery and achieving its goals in terms of employment and inflation," Dr Debelle said.

Growth in the market slowed in April, with national dwelling values up 1.8% after a record 2.8% growth in March.

However, values are up 6.8% in the last three months and are 10.2% higher than the low seen in September.

Dr Debelle said government support schemes brought about by COVID, as well as monetary policy, had contributed to the house price growth.

"Housing price rises are part of the transmission of expansionary monetary policy to the economy," he said.

"They help encourage home building, along with government grants such as the HomeBuilder policy, which boosts activity and employment."

Australia's unemployment rate fell to 5.6% in March from 5.8% in February, according to the Australian Bureau of Statistics (ABS).

Dr Debelle said unemployment was now only half a percentage point higher than it was before the pandemic.

"Measures of underemployment have declined by similar magnitudes. Participation in the labour market has remarkably increased to a record high," he said.

"These are much better labour market outcomes than have occurred in other countries."

However, one of the RBA's main goals is to have inflation sit in a band of 2-3%.

Inflation rose 0.6% in the March quarter to sit at an annual rate of 1.1%, well below the RBA's target.

One of the main ways to increase inflation is to increase employment, pushing up wage growth and flooding more money into the economy.

But even before COVID, Australia's wage growth was low, and the most recent figures show growth sitting at a historic low of 1.4%.

Dr Debelle said the economy had significantly exceeded outcomes on many fronts but acknowledged wage growth was not one of those.

"While the Australian economy has experienced better employment outcomes than most other countries, wages growth in Australia has been noticeably weaker than in many comparable economies, most notably the United States."

However, he said inflation was very close to where the Bank had expected it to be. 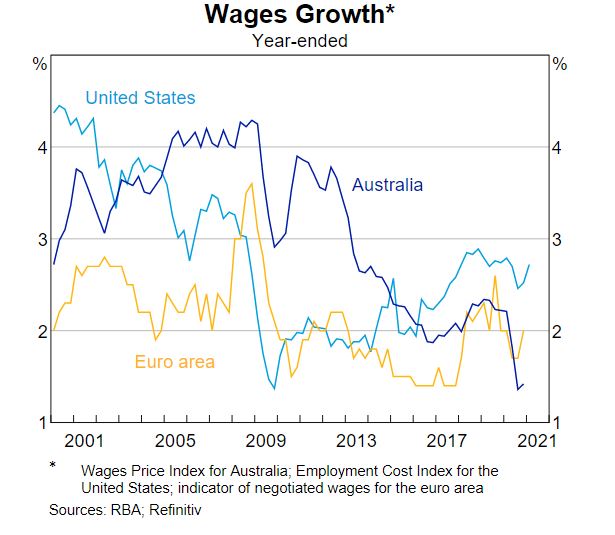 Photo by Agustin Gunawan on Unsplash