Photo by Shaqyl Shamsudheen on Unsplash

Australia's central bank has warned house prices could plummet in the event of a severe downturn.

Assessing how high household debt would affect households' consumption, the paper applied a scenario where house prices would almost halve, which it said was entirely possible given the past and current recession.

"We believe this is an extreme but plausible scenario, which is broadly in line with the shock experienced by some countries during the global financial crisis."

They said the unemployment fall was comparable to what the country was currently experiencing, while the house price fall was extreme, but had been evidenced in other countries in the past.

"The housing price fall considered is more extreme than the 1990s (20% fall in real housing prices) and during the global financial crisis, but is comparable to falls experienced in countries that were heavily affected by the crisis, including the United States (32% fall), Spain (37% fall) and Ireland (55% fall)."

This scenario would also see a substantial fall in consumption of 12%, from peak to trough, which it said demonstrated consumption was more sensitive to a fall in house prices than an increase in unemployment.

"Roughly three-quarters of the consumption fall can be attributed to wealth effects, with the vast majority of this resulting from housing wealth," they said.

"For households over 40 years old, about 20% of the wealth effect is attributed to changes in superannuation assets. The rest of the fall in consumption is driven by income shocks.

"The fall in investment income, bonuses/overtime income and wage income are all of roughly equal magnitude." 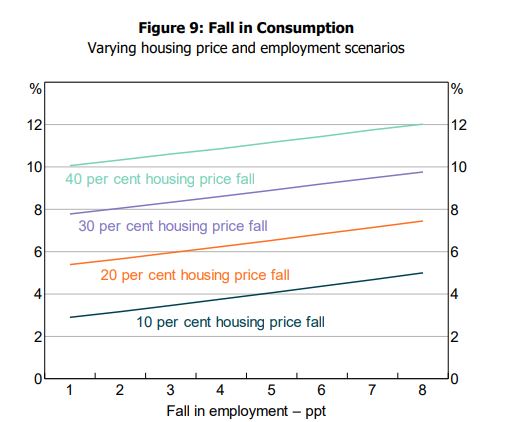 The paper also found while Australia had a high DTI ratio compared to other developed nations, much of our household debt was held by those who wouldn't easily default on it.

"The losses are also low because debt tends to be held by households who are well placed to service it, consistent with previous research (particularly Bilston et al (2015))," they said.

"This means they are less likely to experience income shocks that will reduce their ability to meet mortgage repayments."

In addition to this, foreclosures in Australia are few and far between due to home loans accounting for most of household debt, which are well collateralised.

For those loans which did foreclose or had a high Loan to Value Ratio (LVR), lenders were protected by Lenders Mortgage Insurance (LMI).

The paper said Australian mortgages had low LVRS by international and historical standards.

"For example, less than 10%of new Australian loans are written at LVRs above 90%compared to close to 50% of new loans in countries that experienced a boom-bust cycle during the financial crisis (Kelly, Le Blanc and Lydon 2019)."