Empty rental listings remain low across Australia, with only Sydney and Melbourne tenants having an easier time finding a place at the moment.

Domain's latest vacancy rate data for February 2021 shows the national vacancy rate held steady at 1.9% of properties from January to February, and increased slightly from 1.7% a year prior.

However, the situation is mixed across different capital cities.

Every capital except Sydney and Melbourne recorded a drop in empty listings from February 2020.

Sydney's vacancy rate rose from 2.6% to 2.8%, while Melbourne's surged wildly to 4.7% from 1.6% last year, as Australia's two biggest cities continue to be hit hard by closed borders, lockdowns and a lack of migration.

Of the remaining capitals, only Brisbane has a vacancy rate above 1%, while Hobart has the lowest at just 0.5%.

“In Sydney and Melbourne, the general rule of thumb is that the closer you get to the city, the higher the vacancy rate,” Domain senior research analyst Dr Nicola Powell said.

"Most of our capital cities remain tight and remain competitive for tenants and what we can expect is rents are going to rise.”

Many of the people leaving the bigger capitals are moving to locations a bit further out, as working from home permanently becomes a distinct possibility for some.

For example, last month it was reported by SQM Research that vacancy rates in areas like the Gold Coast had dropped below 1%, with the ABC reporting Metricon Queensland saw an "extraordinary" 400 per cent increase in interstate inquiries wanting to build new homes.

According to Domain, the areas with the lowest vacancy rates across capital city areas include the likes of:

In terms of the highest vacancy rates, areas such as Melbourne City are seeing 11.7% of properties vacant, but in low vacancy capitals, the highest seen in Brisbane, Perth and Adelaide are 4.3%, 1.3% and 5.2% respectively.

"All other capitals have drifted below their vacancy rates from February 2020," Domain's report said.

"This will be a welcome boost for landlords, especially those in Perth who have seen a stark turnaround in the vacancy rate in recent years, falling from 5.0% in June 2017 to a mere 0.7% in February 2021.

Stressed tenants to have a hard time finding new homes

As eviction bans expire and JobSeeker as well as JobKeeper are wound back for good, low-income tenants are set for a tough time, and Dr Powell says it's only likely to get worse.

“When we start to see the rental moratorium ends, we’re likely to see significant jumps in asking rents,” she said.

“There would be many tenants who were paying below market rent.

“Tenants in a rising rental market who are paying below market rent will stay put until they have to move because they’re being protected by the legislation that stops hikes in nets and stops them being evicted.”

Dr Powell's comments are supported by recent research from CoreLogic, which found rents have still increased nationwide, even in areas with as many as 20+% of residents on the JobSeeker payment. 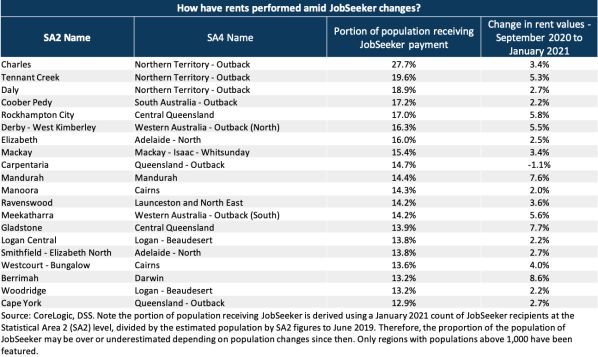 "What this data does highlight is that the impending changes to JobSeeker could create increased divergence between incomes and housing costs for some of Australia’s most vulnerable households," CoreLogic's Head of Research Eliza Owen said.

"While these rental markets may be increasing in aggregate, housing stress, and even homelessness, may be faced by individuals whose livelihoods have been impacted by COVID19."

According to Anglicare, the unemployment payment of around $615 per fortnight from April would see just over 0% of rental properties available for those renters, based on current rental prices.

Research from Better Renting meanwhile found hundreds of thousands of low-income renters could face evictions due to rental debts owed to their landlords.

Photo by Samuel Holt on Unsplash