Sydney property prices have reached new dizzying heights, recovering to surpass their 2017 peak, according to CoreLogic.

“The recovery trend in Sydney following the -15.3% decline from July 2017 to May 2019 was interrupted by COVID-19, with housing values falling by -3.0% through the worst of the pandemic," Mr Lawless said.

"The fresh record high is great news for Sydney home owners, but highlights the challenges for non-home owners looking to participate in the housing market as values rise faster than incomes.”

Since bottoming out in October, Sydney home values have risen by 5.7% to find a new high.

Eliza Owen, CoreLogic head of research, said while the rate of growth may falter, values were likely to continue their upward trend this year.

"The momentum seen so far this year in the Sydney housing market is extraordinary, and it seems unlikely that price increases could continue at this rate," Ms Owen told Savings.com.au.

"I imagine later this year, more listings and dwelling completions could ease growth rates, or affordability constraints could also ease the rate of growth.

"But despite the possibility of a lower growth rate, values are likely to continue rising for the rest of the year."

According to CoreLogic, Melbourne isn't lagging far behind Sydney's record-breaking growth, but Perth is some way away from reaching its former peak.

Melbourne dwelling values are just 1.3% below their pre-COVID high, while Perth values remain 16.9% lower than their 2014 high. 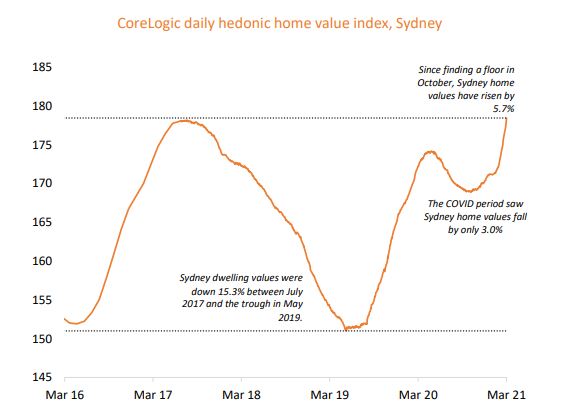 Nationally, dwelling values increased 2.1% in February, the largest monthly change since August 2003, with Sydney and Melbourne the strongest markets, rising 2.5% and 2.1% respectively.

Commenting on the February figures, Mr Lawless said buying property in the two capitals would be challenging for those on lower incomes.

"With household incomes expected to remain subdued and stimulus winding down, it is likely affordability will once again become a challenge in these cities.”

Time for the RBA or APRA to step in?

Reserve Bank (RBA) Governor Phillip Lowe noted for the first time yesterday, that the central bank had discussed the housing market boom, but had no plans to intervene.

"I recognise that low interest rates are one of the factors contributing to higher housing prices and that high and rising housing prices raise concerns for many people," Dr Lowe said.

"There are various tools, other than higher interest rates, to address these concerns, leaving monetary policy to maintain its strong focus on the recovery in the economy, jobs and wages."

Ms Owen agreed it was not the responsibility of the RBA to intervene, despite their policies influencing property prices.

"To an extent, rising house prices are a way low interest rates work to stimulate the economy, because it creates a wealth effect among home owners," she told Savings.com.au.

"Institutions that would have the responsibility of monitoring market conditions would be the Australian Prudential Regulation Authority (APRA), who keep an eye on prudential standards in lending, and government, who would have an interest in addressing barriers to home ownership."

Photo by Adrian Rem on Unsplash