Home / Home Loans / Thinking of selling? There's a flood of listings on the market

Thinking of selling? There's a flood of listings on the market The latest research from 'My Housing Market' indicates national listings so far in 2021 are 7.2% higher than the same time last year.

"Newly advertised listing numbers can be expected to continue to surge over coming weeks and track higher than last year’s results at the same time - particularly as the autumn home auction season gathers pace," he said.

"More listings will be good news for buyers offered more choices – but can expect to pay higher prices in a hot market."

Boosted listing numbers coincide with a pick-up in overall property activity, with university and school returning for another year.

Oneflare CEO BIlly Tucker says there are no signs of activity slowing down on the platform.

"You really can see the impact of a buoyant housing market play out through our bookings - if people are incentivised to buy, sell and build, it creates thousands of jobs for our nation," he said.

"Never before have we seen this size uptick in property-related jobs on our platform."

Global ratings agency Standard and Poor's (S&P) in a recent report said that the flood of new first home buyers into the market has "contributed to an uptick in higher loan-to-value ratio lending".

S&P also expects 1% to 1.5% of all securitised Australian home loans will enter 'formal hardship' at the end of repayment deferrals.

Two per cent of all home loans were deferred as of December, down from highs of 10% seen in June.

"Arrears are expected to increase in the early part of 2021 as borrowers exit payment holidays and income assistance packages come to an end, though the impact will be tempered by low interest rates and COVID-19 related job losses that have affected tourism, leisure and hospitality sectors," the report said.

JobKeeper and heightened JobSeeker are due to wind back entirely in March, along with the bulk of any remaining home loans deferred, though there is talk of assistance being extended for certain industries such as hospitality and tourism.

"Changes to responsible lending along with historically low interest rates are likely to lead to higher leverage levels, as such prudent debt serviceability standards are very important, particularly in an era of low wage growth," the analysts said.

It's also expected that investor lending will "turn a corner" in 2021, with the main lending risks surrounding commercial real estate, and "pockets" of personal loans.

The tap is turned off

January's figures were also 12.1% down on January 2020's results, according to HIA chief economist Tim Reardon.

"After drawing forward sales into December, HomeBuilder will also push sales back until the end of March when the reduced $15,000 grant ends," he said.

“For this reason, sales are expected to remain flat in February before another surge in March.

"The March surge will not be of the same quantum as December due to the lower grant offering."

Mr Reardon also said certain themes will persist in 2021, including the push for detached housing in regional areas coinciding with rising house prices, and low interest rates, "albeit at a level significantly below that observed in the last quarter of 2020". 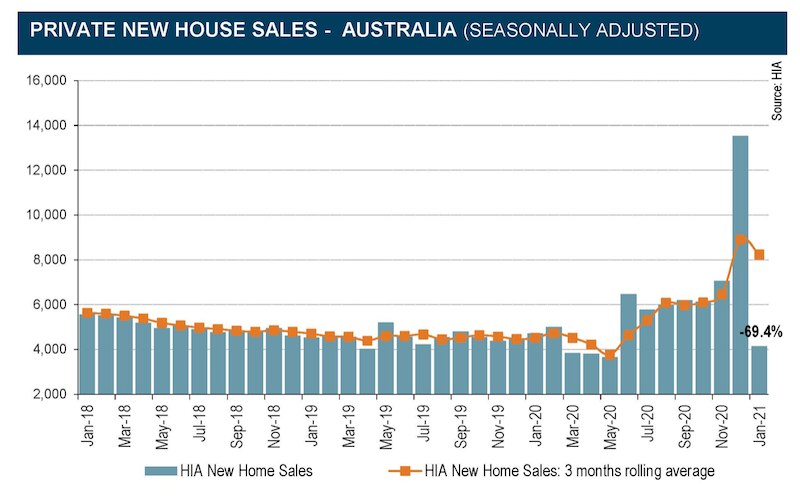 Photo by Nao Takabayashi on Unsplash