Tasmania's streak of nine consecutive quarters as the best performing state economy has been snapped, with Victoria claiming top honours for the first time since June 2020.

CommSec's quarterly State of the States report has revealed Victoria ranked first on both retail spending and relative unemployment, pipping the ACT and Tasmania when compared to the decade average.

In second place was the ACT, leading the way in terms of equipment investment recording positive growth in the June quarter of $549 million and $222 million respectively.

Compared to the decade average, housing finance in the ACT is up 71.2% and equipment investing is up 60.8%.

Tasmania rounded out the top three, ranking second on equipment investment with $304 million at an increase of 36.1% compared to the decade average.

“Victoria may have moved to the top of the economic leaderboard, but there is little to separate the top four economies,” Mr James said.

“In terms of future economic performance, much will depend on how economies are affected by growing COVID-19 case numbers and also how they respond to a period of rising interest rates.” 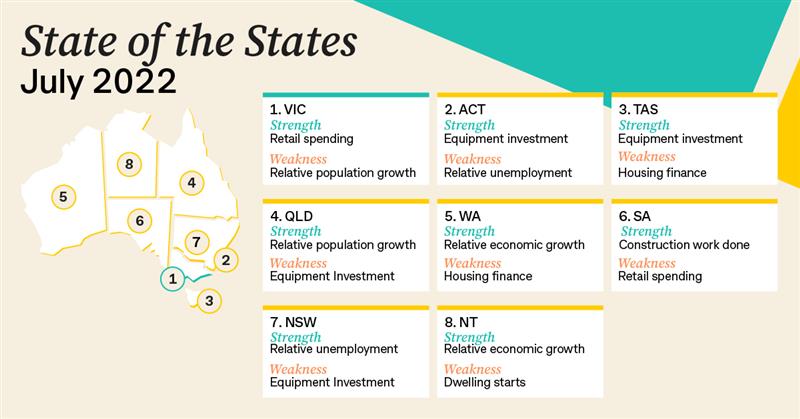 Despite all states and territories recording positive growth in the housing finance category compared to a decade ago, CommSec's State of the State report revealed the category failed to make the cut as a key strength among the larger regions.

This comes as ABS data published earlier this month revealed new housing loan commitments rose 1.7% to $32.4 billion in May 2022, despite cash rate increases front of mind for homeowners.

Further, recent data from PropTrack revealed new listings dropped 3.1% nationally in June, yet were up 8.5% year-on-year across the country to mark the busiest June for new listings since 2011.

PropTrack Economist Angus Moore said property markets across the nation experienced a boom in new listings to what is usually a slower period.

"There has been a brisk pace of new listings, with more new listings nationally across the first half of the year than during any year since 2015," Mr Moore said.

“Though selling conditions broadly have begun to temper after a very strong spring 2021 and early 2022, fundamental drivers of demand remain strong, with unemployment low, wages growth expected to pick up over this year, and international migration now returning.”

Image by John Simmons via Unsplash.