The housing boom still has legs according to this property expert, with regional Australia set to be the 'biggest beneficiary'.

Propertyology's Head of Research Simon Pressley was the only property analyst to predict the initial housing boom, and this time, he's predicting house prices will skyrocket by 30% to 50% across the country over the next two years.

Specifically, Mr Pressley forecasts Brisbane and Hobart house prices will rise by more than 20% next year.

He also predicts Adelaide and Canberra's capital growth will be in the high teens and Perth circa 10%.

This is while Sydney, Melbourne, and Darwin are predicted to produce single-digit growth in 2022.

Going against the gradient, Mr Pressley said it's conceivable that Brisbane, Perth, Hobart, and Canberra could 'easily produce' between 30% and 50% detached house price growth over the two years ending December 2023.

He said that a plethora of regional locations will "do even better", driven by what he calls the "lifestyle movement".

"The combined sum of the many factors that influence property prices points towards a continuation of very strong growth in asset values for quite some time yet," Mr Pressley said.

"[The lifestyle movement] will produce the highest rates of relocations and home upgrades in human history. It is a period when more dreams will be achieved." 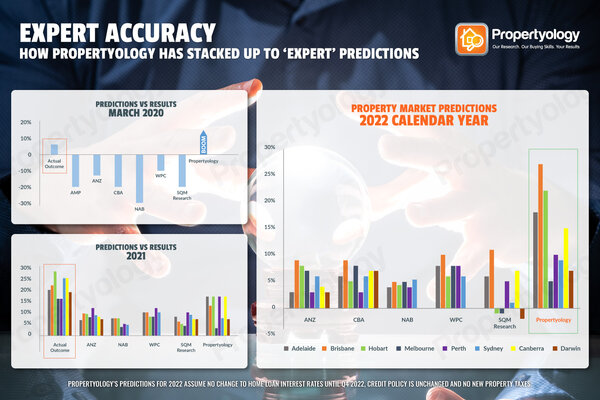 Australia's best property markets will be 'among 200 regional towns'

Mr Pressley said regional Australia will be the 'biggest beneficiary' of the new era of the lifestyle movement.

He said that more than 30% growth is predicted for at least 20 'regional wonders' next year.

"During the first 12-months of COVID-19, the population of regional Australia increased by 51,000, whereas the eight capital cities produced a combined 17,000 decline," he said.

According to Mr Pressley, this will drive 'significantly stronger' property market performance.

However, he said the biggest and most important story in Australia right now is household rents.

He predicts that asking rents for standard houses will increase by as much as $10,000 in 2022 alone, and is concerned by regulator's "obvious lack of understanding of the inputs for rental supply and demand". 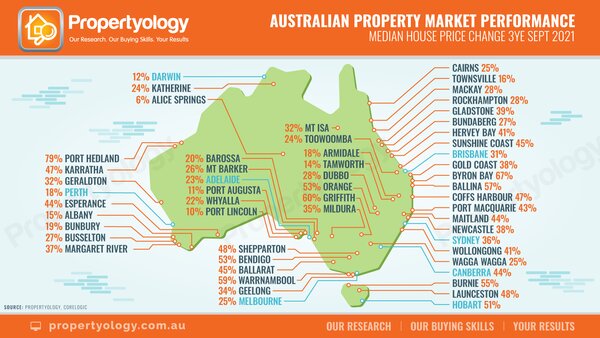 "The economy of Australia’s third largest city is still not as strong as many other locations and commentary about internal migration and infrastructure investment is grossly exaggerated," Mr Pressley said.

He also predicts that Hobart, Australia's best-performing market over the past seven years, will produce circa 20% capital growth next year.

"Tasmania has become home to the most precious real estate in the country. Hobart currently has 70% less resale supply than five years ago and only 97 dwellings advertised for rent," Mr Pressley said.

An accurate read of Sydney and Melbourne's property markets is 'impossible' due to constrained activity during lockdowns in the second half of 2021 according to Mr Pressley.

However, he said the underlying fundamentals of these markets are "the softest in Australia".

"Melbourne had 125,000 less jobs in October 2021 than two years earlier, the city’s population has already declined by 50,000 and state government debt is now three times higher than pre-pandemic levels," he said.

"Like water, oil and flour, this is not a good mix."