Vacancy rates have continued to drop across Australia, reaching a new record-low of 1% in March.

Domain Chief of Research and Economics Dr Nicola Powell said that after one month of international and all domestic borders opening, there is already increased pressure on an already-strained rental market.

"It’s caused a resurgence in rental demand, particularly in Sydney and Melbourne which again have recorded the biggest drop in vacancy rates," Dr Powell said.

All capital cities are now operating in a landlords' market - the first time this has happened since 2017.

Adelaide and Hobart are still the most competitive rental markets with vacancy rates at 'extreme' lows.

Also at their lowest rates are Canberra, Brisbane, and Perth with vacancy rates of 0.5%, 0.7% and 0.5% respectively.

According to Domain, the resurgence in rental demand will primarily occur in Sydney and Melbourne.

This is already evident in Melbourne's vacancy rate 'recovering' from 2.1% in February to 1.8% in March; Sydney's vacancy rate also dropped from 1.7% to 1.4%. 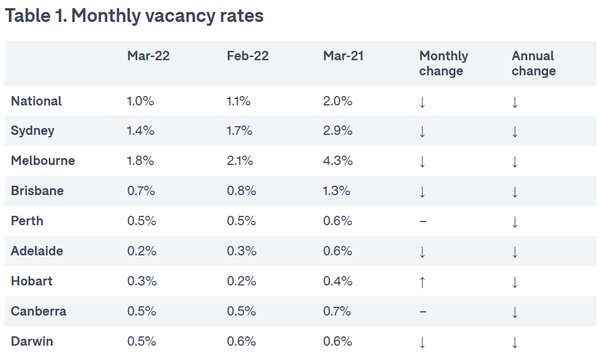 Image by Kinga Cichewicz on Unsplash