Australian retirees will outlive their savings by a decade, says new report Photo by Vlad Sargu on Unsplash

A report by the World Economic Forum has made the grim warning that Australians will outlive their superannuation account balances.

According to the report, Australian women face a larger super gap than men, outliving their superannuation savings by 12.6 years while men are expected to outlive savings by 9.9 years.

If you think that’s bad, the situation in Japan is a lot worse. Japanese women are expected to outlive their retirement savings by almost 20 years, and men 15 years, with half the amount of savings as Australians. 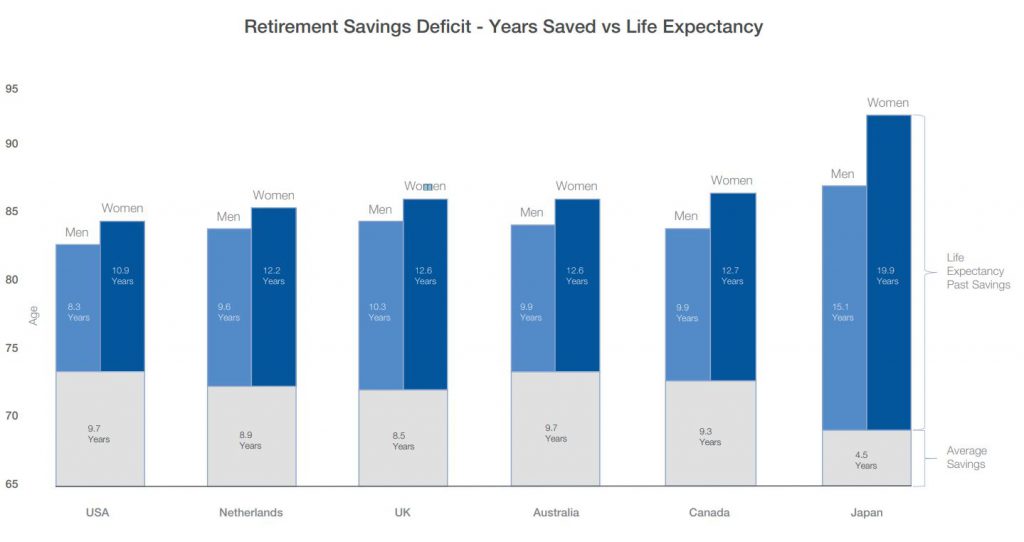 The report described Australia’s retirement saving scheme as being “one of the most well-developed from an accumulation perspective, with high levels of coverage, mandated levels of savings and strong investment architecture”.

But the report also says long-term approaches are needed for the retirement phase as people are now living longer after retiring.

“Our aging population has placed unsustainable pressure on government and employer-sponsored pension systems, leading to a growing trend for individuals to take responsibility for financing their own retirement. But savings have failed to keep pace with the decline in traditional pension plans, leading to the current retirement savings deficit,” the report said.

The retirement savings gap was already at $70 trillion in 2015. The report warns that if steps aren’t taken to address the issue, the gap will grow to $400 trillion by 2050.

Han Yik, Head of the Institutional Investors Industry at the World Economic Forum, said people need to invest in their retirement savings earlier in life.

“The real risk people need to manage when investing in their future is the risk of outliving their retirement savings,” Mr Yik said.

“As people are living longer, they must ensure they have enough retirement funds to last them through their longer lives. This requires investing with a long-term mindset earlier in life to increase total savings later on.”

The report said the government should rethink its current approach to pensions.

“Typically, a retirement investor’s mindset is risk-averse and values consistent saving over a long time period. However, the report highlights the need for young and middle-aged savers to realign their pension investments, to embrace greater short-term risks that generate higher long-term returns,” the report said.

“Policymakers must put in place robust and creative solutions to protect retirees as they age, such as pooled annuity funds, to allow flexible spending while ensuring savings last through retirement.”

The findings of the report come amid government plans to increase compulsory employer superannuation contributions from 9.5% to 12%.