ING, 86 400, RAMS, UBank and others chop and change savings accounts There might not have been another cash rate cut in December, but that doesn't mean your savings interest rates aren't changing.

The Reserve Bank maintained a record low 0.10% cash rate on Tuesday, and said it would remain so for several years, while new data to emerge showed Aussies are still stashing nearly 19% of their income away in their bank accounts, in addition to cramming an extra $10 billion into the banks in October.

Despite no change to the cash rate and a continued reliance on cash deposits, Aussie savers continued to take a beating, with numerous banks either cutting their savings rates or changing their conditions in recent weeks.

ING's most recent savings account cut came in the wake of the Reserve Bank's decision to cut the cash rate to 0.10%, even after it did not pass this on to variable home loan rates.

Neobank 86 400 - which in September halved its deposit limit and also lowered its interest rate by 25 basis points in October - announced a further 15 basis point reduction to 1.20% p.a from 20 November, with customers still required to deposit $1,000 per month to earn more than the base rate of 0.10% p.a. 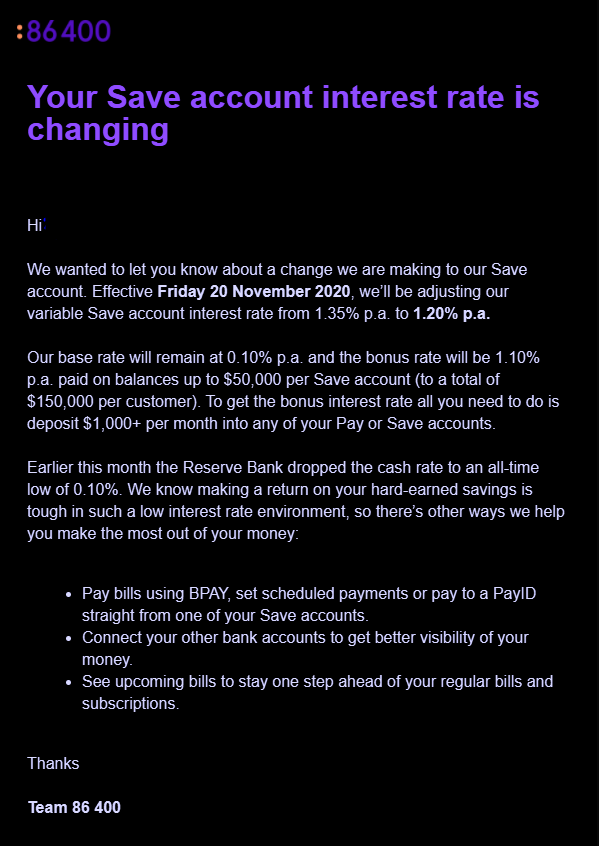 The RAMS Saver account, once the darling of many keen savers that could formerly claim one of the highest savings account interest rates on the market (2.80% p.a in June 2019), has seen better days.

In a note sent to customers, the Westpac-subsidiary confirmed the RAMS Saver's total interest rate would be cut on December 4 by 20 basis points to just 0.55% p.a.

The bank also said that "following a strategic review", there will be a further rate reduction in 2021. 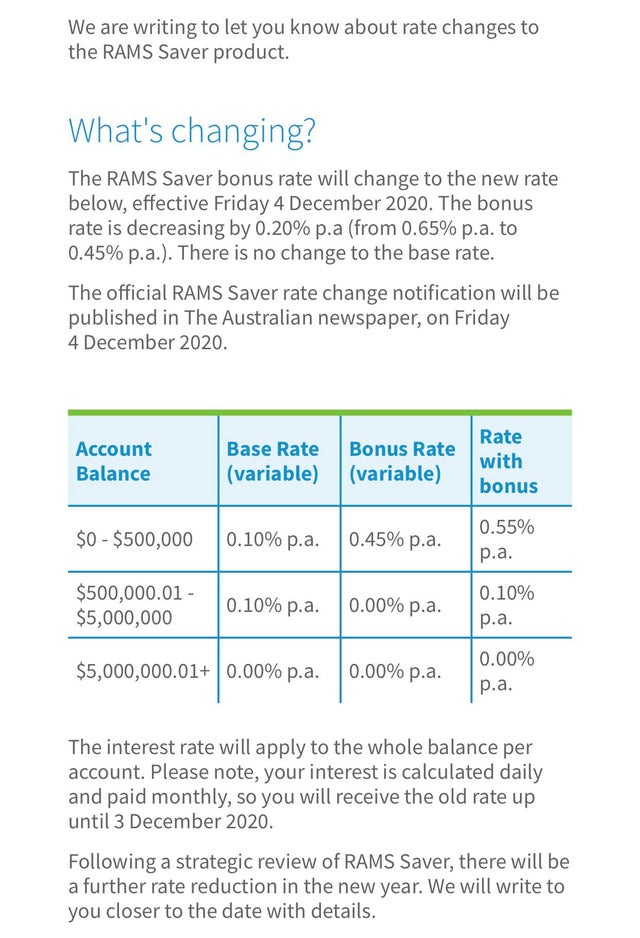 Having previously cut its maximum interest rate on the USave + USpend account by 15 basis points to 1.31% p.a on 13 November, popular online bank UBank made another minor adjustment this week.

On December 1, the NAB subsidiary cut this interest rate by a further 6 basis points to 1.25% p.a.

The conditions to earn the bonus interest of 1.06% p.a remains unchanged, requiring customers to:

Another of the market leading rates, MyState's Bonus Saver Account, also reduced its interest rate by 15 basis points on December 1.

This account now has a maximum interest rate of 1.35% p.a, as long as customers deposit $20 or more and make five or more settled eligible VISA Debit card transactions from a linked account each month.

What now for savers?

Despite these continued changes to savings account rates - other banks to cut last month include ANZ as well as ME and Macquarie Bank - Australians are still putting money away into banks.

In addition to the household savings data mentioned earlier, other recent research shows 57% of the 11 million Australians receiving their 'Stage two' personal income tax cuts - around $40-$50 a week extra for low and middle-income earners - planned to save it.

With rates as low as they are, Raiz Founder and CEO George Lucas told Savings.com.au last month that many deposit options now are little more than "parking accounts" to secure money, instead of trying to gain any interest income.

"To put it simply, inflation may be low, but interest rates are in many cases even lower," Mr Lucas said.

However there are still some good interest rates available out there, such as the ones listed in the table below, which include some special interest rates for people below a certain age.

For more help on finding a worthwhile account, check out Savings.com.au's guide to choosing the right savings account.

Photo by Chris Lawton on Unsplash