Most Aussies don’t understand the very basics of their money New Research by Raiz has found many Australians lack a clear understanding about basic personal finance, including their own savings account’s interest rate.

Micro investing app Raiz surveyed 1,000 Australians to identify their level of understanding of savings and investment options, and the research found that while 60% of us claim to have some level of knowledge of investing, 85% don’t even know what the interest rate on their savings account is.

53% of Australians meanwhile are unaware cash is the safest place to store savings – 22% believe property is the safest investment option, 20% think fixed income is while 10% think equities (shares) are the safest.

Compared with cash, p, fixed income and equities generally have greater potential for returns at the cost of being riskier asset classes.

Raiz CEO George Lucas said many respondents may have confused safety with the best long-term returns.

“Most people have not experienced or  an extended period where stocks and property have gone down,” Mr Lucas told Savings.com.au.

“When we talk about the safety of cash, we mean that at any point of time when you need your wealth, for example, to pay a deposit for a house or fund a trip, you can access the amount you need with full confidence that the amount you saved is still available.”

Mr Lucas also said many people are mistaken when it comes to knowing their interest rate.

“Many Australians are completely unaware of the best options to protect and grow their income and think they’re getting 2-3% on their savings accounts when, depending on the bank, it’s often less than 1%” he said.

“This is due to the way saving accounts are advertised with introductory offers. At this interest rate, if Australians are using their savings accounts to save money, with inflation, the opposite is happening and they’re actually going backwards.

“That’s why it’s important to ensure we’re educating consumers now on how to look after their money if they’re to become more financially stable in the future.”

A brief look at the market’s highest rate savings accounts shows the top interest rate the average Joe or Jane can get is 3.10%, but this is an introductory rate for just the first four months.

The second highest rate – 3.05% – is also introductory. The highest non-introductory rate available with no restrictions on age or deposits is the 2.90% available from CUA.

Bank of Queensland recently released a 3.00% savings account, but this product is only available to people 25 and over.

Equities can be quite risky at the best of times due to the volatility of everyday stock markets, and it appears women understand this risk more than men.

38% of men invest in the equity market according to Raiz, compared to 22% of women. 16% of men also consider themselves ‘extremely knowledgeable’ when it comes to the stock market, while just 6% of women feel the same.

Yet Raiz’s data shows 34% of men use the Raiz app’s ‘aggressive’ growth portfolio, compared to 21% of women.

“This is not a surprise as it’s also something we see at Raiz. In the Raiz app, we have six portfolios for users to select from when investing their money,” he said

“More men opt for the aggressive portfolios than women, who tend to select the more conservative options.

“This is not evidence that men are more financially literate than women. If anything, it indicates that men are taking more investment risks they don’t fully understand,” Lucas says. 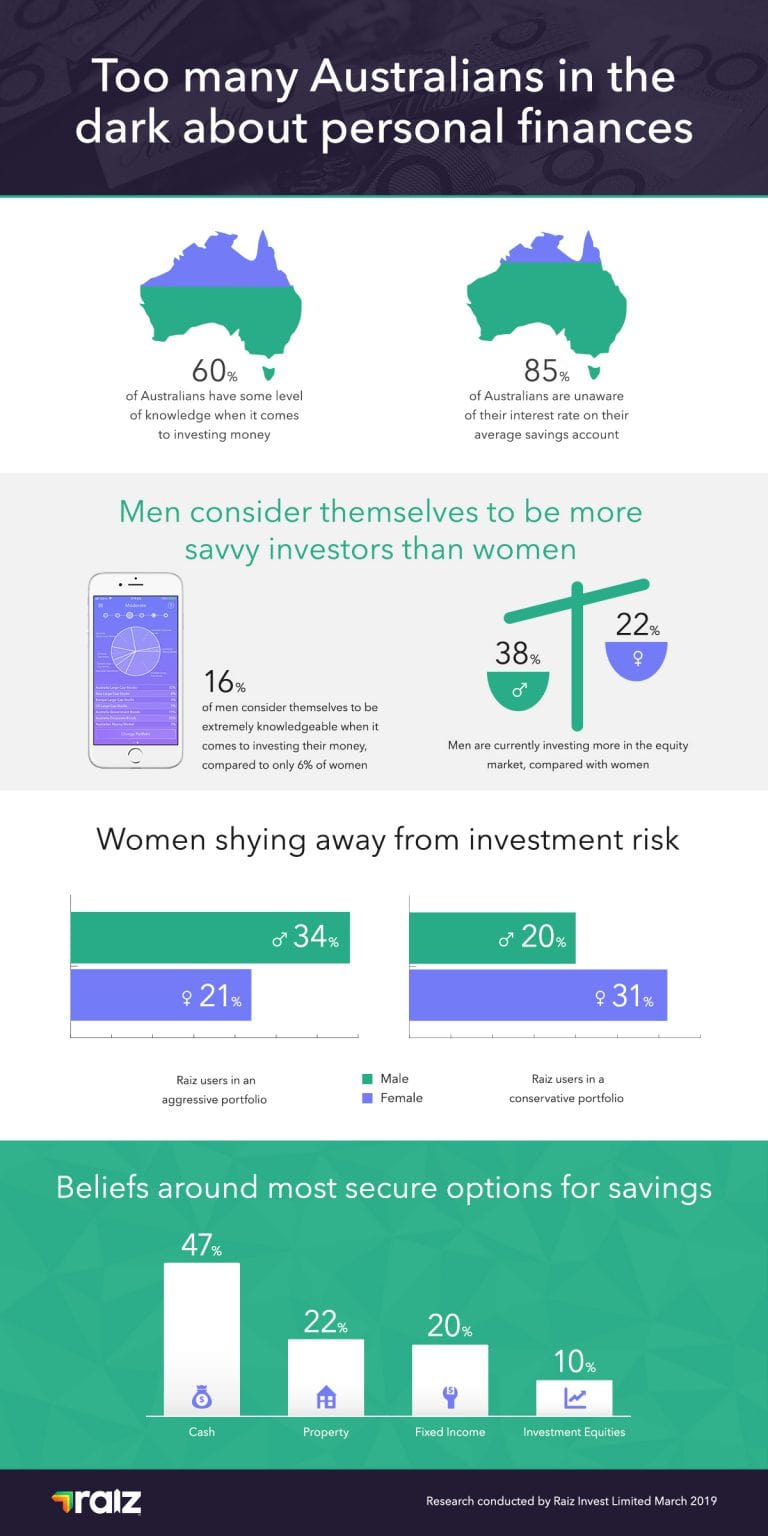 The royal commission might have passed but the aftershocks are still being felt by both the banks and their customers.

Raiz found the royal commission has had a major impact on consumer confidence levels, with nearly half (47%) of people saying they’re less inclined to invest their money in the big four banks following Commissioner Hayne’s final report.

“For a while now, Australians have felt less inclined to invest with the big banks. There was an ethical line that many felt was crossed and now people are looking at alternative ways to invest their money,” Lucas says.

“More than half of those who took part in the research said they will now look to diversify their investments.”

Overall trust in the banks is down too: a study from ME Bank in March found 94% of people believe banks don’t act in their best interests, while a similar report from Deloitte found it was 79% of people who didn’t trust them.

People are quite apathetic towards their banks however, with only 48% of the respondents who distrusted their banks actually willing to switch.