Treasury tips unemployment to hit 10%, recession all but confirmed Treasurer Josh Frydenberg said unemployment is expected to rise to 10% in the June quarter due to the coronavirus outbreak.

But Mr Frydenberg also said unemployment could've risen much higher if not for the government's stimulus interventions.

"In the absence of the $130 billion JobKeeper payment, Treasury estimates the unemployment rate would be 5 percentage points higher and would peak at around 15%," Mr Frydenberg said.

"More than 800,000 businesses have already registered for the JobKeeper payment which will allow the economy to recover more quickly once we are through to the other side of the crisis."

These 800,000 businesses account for some six million workers, almost half the Australian workforce.

Should the Treasurer's projections prove accurate, the 10% peak will fall marginally below Australia's highest peak unemployment rate of 11.2% in 1992.

Australia's current unemployment rate sits at 5.1%, with figures for March released on Thursday expected to show a 0.3% increase to 5.4%.

With an unemployment rate of 10% and Australia's growth expected to be negative for at least Quarter 2 and 3 in 2020, the country is all but certainly going to enter a recession.

Mr Frydenberg said the challenges facing the population and businesses currently were far greater than in the Global Financial Crisis a decade ago.

"Businesses across a range of industries have had to close their doors and others have seen a significant drop in activity as countries, including Australia, exercise social distancing measures to contain the spread of the virus," he said.

"It is against this backdrop the government has taken action with $320 billion or 16.4% of GDP in economic support for the Australian financial system, businesses, households and individuals affected by the coronavirus."

After passing Parliament last week, the JobKeeper scheme will kick into gear on May 1, with workers receiving $1,500 a fortnight, backdated to March 30.

NAB's monthly business survey has recorded a mammoth drop off in confidence, taking the index to its lowest ever result.

With the government taking the economy and many of its businesses into forced hibernation, the business confidence index dropped to -66 points, from -2 points in February.

NAB chief economist Alan Oster said the index could still fall further, with the government stimulus measures not able to save many businesses.

“Business has essentially told us that trading conditions, profitability and employment all went backwards in a big way in the month,” Mr Oster said.

“While almost everyone expects a fairly rapid rebound once the spread of the coronavirus is contained and social distancing rules are relaxed, the immediate worry for the business sector is the impact on cashflows.

"Without cashflow support, it is likely many businesses will be severely impacted and unable to return to operations once the economy begins to recover.

"This has been an important focus of policy makers." 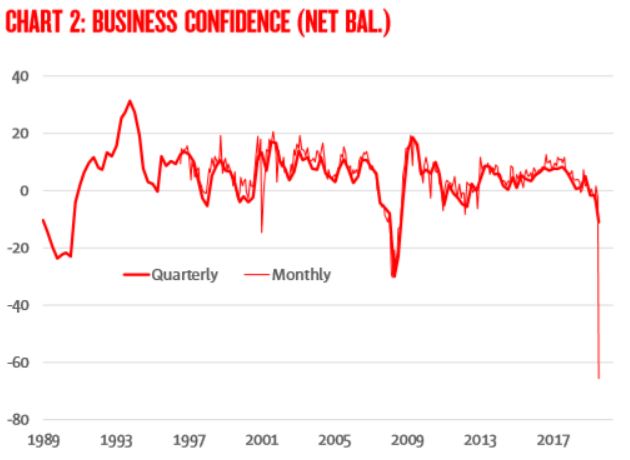 Mr Oster added that Australia would enter recession for the remainder of 2020 on a scale not ever seen before.

“We expect a recession of unprecedented speed and magnitude for the Australian economy over the next three quarters," he said.

"This will see a sharp increase in unemployment."

The Government has announced a string of measures designed to keep small businesses afloat, which included cash handouts of up to $100,000, wage subsidies and tax write offs.

Additionally, new rules on commercial tenancies were announced, whereby tenants and landlords can waive or defer their rental amount if they are eligible for the JobKeeper program and have a turnover of $50 million or less annually.