Home / SMSFs / Retirement costs rise: How much super do you need?

Retirement costs rise: How much super do you need? Australians who want to live comfortably in retirement could be forced to work longer as costs increase, new figures show.

Couples aged around 65 who want to live a comfortable retirement will need to spend $62,562 per year and singles would need $44,224.

That's a 0.9% increase on the previous quarter, according to new figures from the Association of Superannuation Funds of Australia (ASFA) Retirement Standard for the December quarter 2020.

The figures show older retirees continue to experience financial pressures, with retirement budgets for those aged around 85 up 0.9% from the previous quarter for couples and 1.0% for singles.

"Now, price increases are returning to a more standard pattern following a few quarters of suspension or delay in key costs, such as health insurance premiums," he said.

Health insurance premiums increased by 3% from 1 October for many retirees, and will rise again come April 1 this year.

The cost of domestic holiday travel and accommodation also increased, up by 6.3% over the quarter in response to the opening of borders, while meals out and takeaway foods increased in price by 1.1% as well.

“As a greater number of people ventured out of their homes in search of a meal out or a domestic holiday, we saw price rises in those areas, which is not altogether favourable for retirees on a budget," Mr McCrea said. 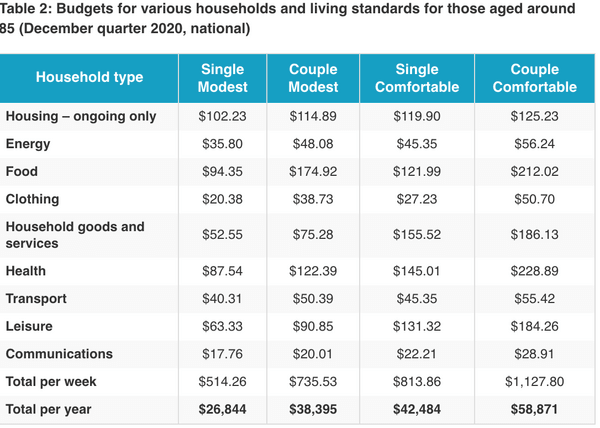 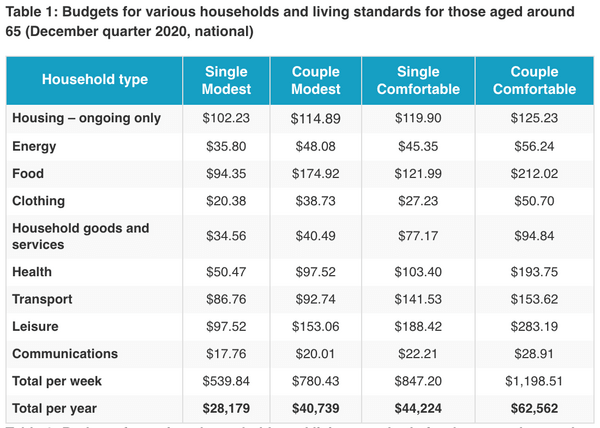 According to ASFA, a couple needs $640,000 in super to live comfortably in retirement while singles need $545,000, but the real number may not be so high.

Last years' Retirement Income Review found the ASFA Retirement Standard actually reflects a much higher standard of living than most Aussies ever experience.

"Some submissions from the superannuation industry endorsed the ASFA comfortable standard as a retirement income adequacy goal. The standard has several shortcomings as an adequacy objective," the review said.

"It was initially designed as, and continues to reflect, a standard for the top 20% of income earners.

"Further, it constitutes a standard of living higher than that experienced by most Australians during their working lives."

The review also found that the ASFA standard of a comfortable retirement does not account for the trade-off between working life and retirement living standards.

"A retirement goal is not appropriate if achieving it would come at the cost of a substantially lower standard of living in working life."

According to ASFA, a 'comfortable' retirement is one that includes domestic and occasional international holiday travel, good wine, being able to regularly eat out at good restaurants, and owning a nice car.

Meanwhile, a 'modest' lifestyle includes having one or two short domestic holidays every year, eating out at cheaper restaurants, having private health insurance and owning 'reasonable' clothes.

Half of Australians unsure how much money they'll need in retirement

These latest figures come as Financial Wellness research from AMP found that almost half (44%) of Australians are concerned they won't have enough money to retire, with two in five (39%) worried they will have to work longer than expected to afford a comfortable retirement.

AMP has today announced the launch of a new retirement health check advice offer provided free of charge for members of its superannuation funds.

The retirement health check will be delivered by a team of Retirement Specialists to help members consider their retirement options, how much superannuation is enough, how long money needs to last and general age pension entitlements.

“Our Financial Wellness research shows that Australians feel underprepared and concerned about retirement - 50% don’t know how much money they’ll have or need to achieve their desired living standard in retirement," Mr Owen said.

“Retirement is a critical period in our lives and the retirement income system is complex so it’s crucial people get access to information, guidance and good advice.

“The new offer will help our members take more control of their retirement, in particular, the critical and sometimes complex transition from our working lives into retirement."

The research found an overwhelming 54% of women expect a modest or difficult retirement compared with 46% of men.

Only 29% of women are confident they'll have enough money in retirement, compared with 48% of men.

“This (retirement planning) is especially important for women, with our research showing they are more likely to have higher levels of financial stress, are less likely to have retirement goals, and are more concerned about retirement," Mr Owen said.

“Encouragingly, people recognise the importance of planning for retirement, albeit are unsure where to begin. COVID-19 has also acted as a wake up call, with more Australians setting goals and planning for their futures.

“The challenge is turning this positive intent into action, which is where the health check comes in, arming members with important information about the changes they can make now, even small ones, that can amount to big benefits later in life."

Photo by Matthias Zomer  from Pexels

How to buy property through an SMSF in Australia

What happens to my SMSF if I move overseas?