Deeming rates to be reviewed after another RBA rate cut Photo by CDC on Unsplash

Treasurer Josh Frydenberg said the government will review deeming rates after the Reserve Bank's (RBA) decision to cut the cash rate to a record low 0.50%.

In a press conference on Wednesday, Mr Frydenberg said the current deeming rates of 1% and 3% are under very serious consideration and conceded that times were tough for depositors.

"We are now having another look at the deeming rate," Mr Frydenberg said.

"That change that we introduced - announced last year was around $600 million in terms of its cost.

"But we do recognise that both depositors and also borrowers are affected here by the changing interest rates."

Interest rates have been cut eight times since 2015, but deeming rates have only been cut twice in that time, most recently in July of last year.

The government has been accused of hypocrisy for calling on the banks to pass on interest rate cuts in full but not passing on the cuts to pensioners.

"But I can tell you that if that was a private company doing that, their behavior would be seen as unconscionable," Mr Henschke said.

"And also, if it was a private company doing that to their wage and salary earners, which in a way pensioners are, you'd be saying that you were involved in wage theft because they're actually taking money from people by not passing that on." 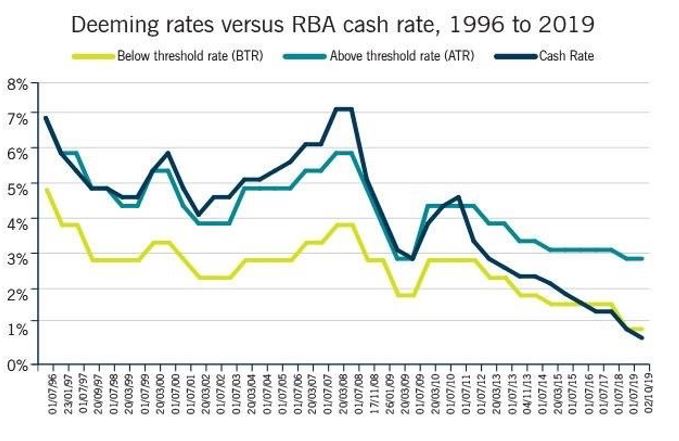 Mr Henshke called for immediate action to lower deeming rates and said the government was balancing the budget on the backs of pensioners.

“And to suggest older Australians “have a suite of investment options” flies in the face of reality when hundreds of billions of dollars have just been wiped from the share market.”

Mr Henshke pointed to the fact that the best savings account and term deposits rates only just exceeded 2%, well below the high deeming rate of 3%.

Calls for an independent body to set deeming rates

Mr Henschke told Savings.com.au the pension and deeming rate system was in desperate need of an overhaul, with the government failing tens of thousands of pensioners.

"I believe that we should have a system where people can work if they wish to work, particularly those that want to work, shouldn't lose their pension entitlements for working," he said.

"I think we really have to rethink this whole idea of what the pension is because it was created at a time when most people owned their own home. And so therefore, the majority of people were able to get by on a pension.

"But now when you've got so many people entering pension age range, particularly women, we know that one in four Australian pensioners are living below the poverty line."

He called for an independent body to control the pension and how deeming rates are set, to stop the government from propping up the budget on the backs of the vulnerable elderly population.

"And it may well be that the pension needs to be different from state to state, depending on things such as the cost of rental housing in cities."