Australian house prices over the last 50 years: A retrospective If you talk to anyone under the age of, say, 50, I don’t think you’d get much of an argument that Australian house prices are completely out of control.

Gen X’ers, millennials, and zoomers would say they've gotten a pretty raw deal when it comes to home ownership.

Many boomers, at least as the stereotype goes, would counter that this is just sour grapes – that house prices aren’t really all that much more expensive after accounting for inflation, that they paid much more in loan interest, and that they didn’t get any subsidies like the first homeowner’s grant we have today.

Who is right? Well, let’s sit back with a slice of our favourite artisanal sourdough smothered in avocado, look at the data and try to figure it out.

First, let's go back to the early 1970’s. This was the earliest I could find reliable data from the Australian Bureau of Statistics (ABS). Here’s what houses cost in the capital cities:

You can watch this all the way to the present day if you want, but the numbers will look artificially low because they don’t account for inflation – see a little further down the page for an inflation adjusted version.

Here’s what a house cost in each of the capital cities (except Darwin – sorry guys, blame the ABS) in 1973:

You can see that a dollar back in the day went a lot further – around 11 times further according to the Reserve Bank's (RBA) inflation calculator, in fact. Check out this Woolies catalogue from 1973: 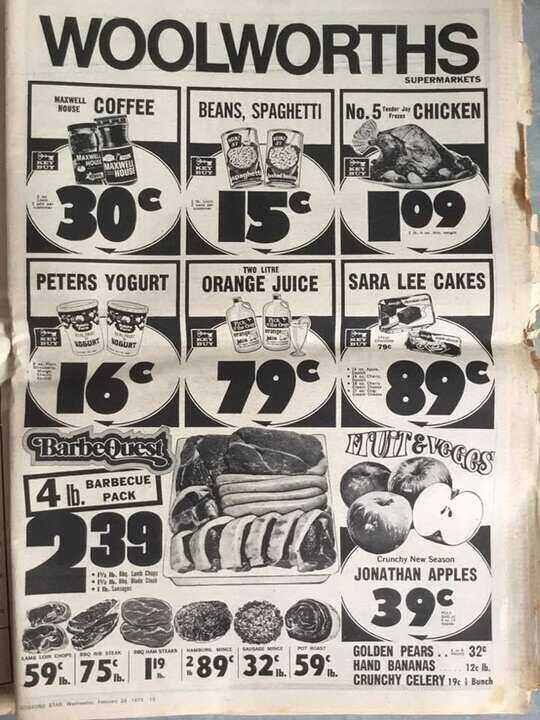 Remember the good old days when you could buy a whole chicken for $1.09? Yeah, me neither.

The average adult wage back then was around $4100 in 1970, or about $48,000 after we run it through the RBA’s inflation calculator. The below image is from the ABS (PDF warning):

Just for reference, the total Australian population back then was around 12.5m, pretty much bang on half of what it is today. Interestingly, not all cities have grown at the same rate, as you can see from the following chart:

Although Sydney and Melbourne are clearly in their own league in absolute terms, Brisbane, Perth, and Canberra are growing much more quickly – the latter two cities tripling in size since 1970. Melbourne has roughly doubled. Sydney and Adelaide are actually the laggards, with about 70% population growth over the last 50 years. This chart might illustrate things better:

Anyway, back to our house prices. The racing bar chart below is the same as the first one I posted above, but this time it accounts for inflation – i.e. all dollar amounts have been converted into 2020 dollars using the RBA’s inflation calculator (P.S: Darwin people, your time has come… you’ll appear around 1986):

In 2020, the average house in Sydney costs north of $1.1m. If you had a time machine and could go back to 1970, that same amount of money could buy you 5.2 houses in inflation adjusted dollars. The below animated line chart shows how this ratio has changed over time:

The above chart shows that a house in Sydney has ballooned to 12.2 times annual income. Again we see similar, though less pronounced, trends in other cities.

There are a couple of caveats to keep in mind with this data, however.

On this last point, I did manage to find some interesting data from the ABS, though it only goes back to 1978:

What’s interesting to note from this chart is that while it’s certainly true that female employment has increased by nearly 50% (39.8% in 1978 vs. 57.1% in 2018), male employment has decreased by about 10% in the same period (75% in 1978 vs. 67% in 2018). It’s therefore overly simplistic to state that household incomes have ‘doubled’ since women have entered the workforce, and that this accounts for increased house prices.

Finally, we need to look at how interest rates have changed over the last 50 years.

The above chart shows average lending rates on owner-occupier home loans. I know, I know – the 3.65% showing in 2020 seems way too high, but this is the RBA’s own data and I didn’t want to tamper with it or try to cherry-pick. Perhaps 3.65% p.a is the average comparison rate people are currently paying, unfortunately the RBA data doesn’t make things 100% clear.

Anyway, with this data we can now plot out the average cost of servicing a mortgage – both the principal and interest payments – over the last 50 years:

Here’s a non-animated version that might be a little easier to read:

It’s interesting to note that, although in all cases things are significantly less affordable than they were in 1970, in most cases we’re not actually at peak un-affordability when it comes to servicing a mortgage. Although house prices in all cities are at or near historical highs, interest rates are at all time lows. For Sydney, peak mortgage pain came in 1990 when average home loan rates peaked at about 17% and you were paying $4400 / month in 2020 dollars towards your mortgage.

So with all the above in mind, what can we actually infer from the data? I think it’s fairly safe to make a few pronouncements.

So anyway, there you have it. It’s probably not going to come as a surprise to anyone that house prices have gone up significantly over the last 50 years. What I did find interesting is that, assuming you have enough money for a deposit and you can get a competitive interest rate (as opposed to the 3.65% figure I used in my charts), servicing a mortgage is in all cases easier today than it was in 1990. Here’s the same chart above, but with a 2020 interest rate of 2.7%:

Just for fun, the final chart below shows what monthly mortgage repayments would be if interest rates went back to their 1970 peak of 17%:

This content was originally published on Datamentary.net, and was republished with permission.

Datamentary Not an economist or mathematician - just a guy who enjoys data visualisation.