Home / Home Loans / Mortgage loyalty tax could be costing you an extra $1,000 a year, RBA says

Mortgage loyalty tax could be costing you an extra $1,000 a year, RBA says Photo by KS KYUNG on Unsplash

Borrowers with older mortgages could be paying higher interest rates than those who take out new loans.

The Reserve Bank of Australia (RBA) has urged loyal borrowers to shop around and get a better deal on their home loan after new data revealed the difference between the interest rates paid by new and existing borrowers.

In its February Statement on Monetary Policy, the RBA noted that for variable rate mortgages, older home loans typically have higher interest rates than new home loans -  even for borrowers with similar characteristics.

The difference in interest rates between new and outstanding variable rate home loans was also found to increase with the age of the loan.

According to the RBA, variable rate home loans that were taken out four or more years ago have an interest rate around 40 basis points higher than new loans.

"This reflects the fact that the discounts offered to lenders' standard variable rates have risen over recent years and these discounts tend to be fixed for the life of the loan - what might have once seemed a big discount might not be so big now," Mr Lowe said.

"As I have said a number of times recently, if you took your loan out a while ago it is worth shopping around and checking in with your lender to see if it can now give you a bigger discount."

Thinking about refinancing to a low-rate, owner-occupier home loan? Below are a handful of low-rate loans in the market.

The RBA said some of the difference in interest rates between older and newer mortgages can be explained by a shift in the different types of variable-rate mortgages over time.

"In particular, the share of interest-only and investor loans in new lending has declined noticeably in recent years and these tend to have higher interest rates than other loans," the RBA said.

But the RBA also said that even within the same types of mortgages, older mortgages still tend to have higher interest rates than new mortgages.

The RBA pointed to increased competition in the home lending space driving the rate gap.

"However, the time at which the mortgage was taken out also has an important influence on the interest rate paid. This reflects the tendency for competitive pressures to be strongest for new and other borrowers who are in the process of shopping around for a loan." 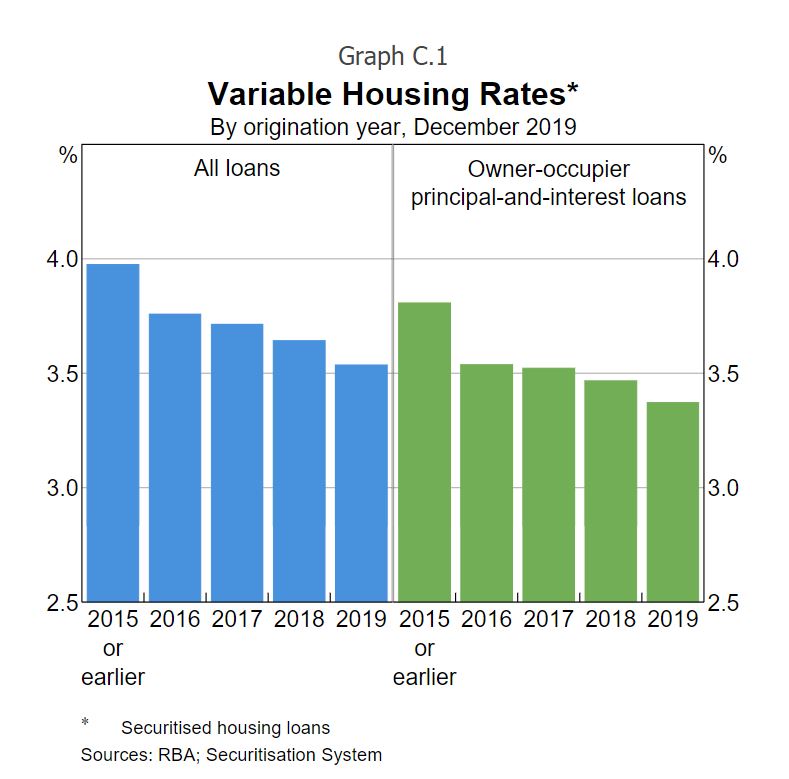 It comes after the Federal Government called on the Australian Competition and Consumer Commission (ACCC) to conduct an inquiry into home loan pricing.

"Having consumers and the community understand how pricing decisions are made, why, and with what consequences is important for a well-functioning market," Mr Sims said.

"We will aim to provide answers to the questions that banking customers have long asked. For example, we know from our first financial services inquiry that there is an unusually large difference between the headline rate and the actual rates many customers are paying, which can be confusing for consumers. It is also very difficult for customers to find out what mortgage rate they could pay with another financial institution without going through a lengthy and time consuming process.

"We have evidence that customers can save considerable money by switching providers, and we want to fully understand what the barriers are that stand in their way, particularly barriers created by the banks."

"In addition, most individual borrowers are offered, or may be able to negotiate, further discounts on the interest rate applied to their loan."

"By increasing the discounts on rates for new or refinancing borrowers over time, rather than lowering the standard variable rate, banks are able to compete for new borrowers without lowering the interest rates charged to existing borrowers," the RBA said.

However, the RBA also noted that interest rates charged on outstanding variable-rate loans has declined more than standard variable rates which it attributes to "well-informed borrowers" who have negotiated a larger discount with their current lender.