Did HomeBuilder cause new home sales to soar in June? Following a record low in May, sales of new homes in June soared by more than three-quarters amid the introduction of the HomeBuilder scheme.

Housing Industry Association (HIA) data for June shows new home sales rose by 77.6% after May's record low, with HIA chief economist Tim Reardon saying this was off the back of the Government's HomeBuilder program, which was announced at the beginning of the month.

"The rebound in New Home Sales in June does not fully offset the dismal results of the preceding three months and we are cautious of over-interpreting data from a single month," Mr Reardon said.

"It is a clear indication that HomeBuilder will help protect jobs in the sector in the second half of 2020 and into 2021.

“Additional sales data from July and August will be necessary before drawing accurate estimates on the impact of HomeBuilder on employment in the sector.

Read: How to save on house renovation costs

New home sales had consistently fallen to their lowest ever levels throughout March, April and May, and according to HIA a significant contraction in the volume of work would have occurred in the second half of 2020.

This, in turn, could have led to a wider contraction in the broader economy, with home construction ranking as the second biggest driver of jobs.

"Up to half a million jobs were at risk without government intervention," Mr Reardon said.

“The improvement in June can be seen across all the states which is a good indication that the HomeBuilder program is working, to varying degrees in each jurisdiction.

“The Government’s announcement of the HomeBuilder program has seen confidence in the market improve." 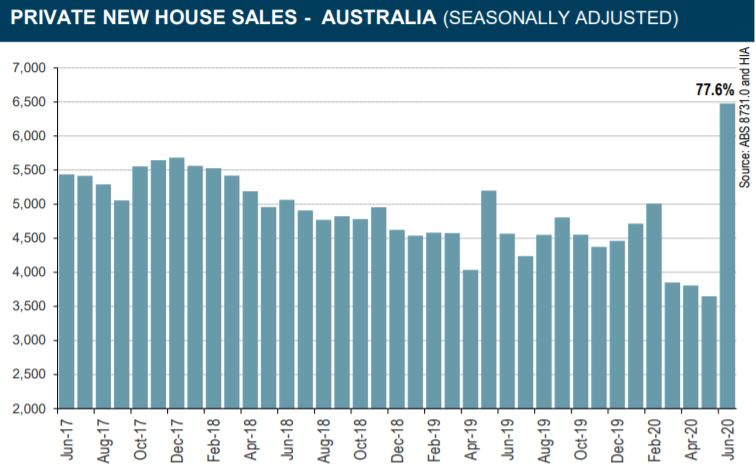 As of last week, all states and territories have signed onto the HomeBuilder scheme after initial confusion, with Tasmania formally accepting applications.

Despite the states and territories not formally taking applications in June when this data was recorded, that hadn't stopped people registering interest.

Earlier this week, Minister for Housing and Assistant Treasurer Michael Sukkar told Sky News over 40,000 people have registered for HomeBuilder grants since it was announced on June 4.

Given the relatively strict eligibility criteria, its likely not all of these expressions of interest will led to grant approvals.

“If the momentum from HomeBuilder continues, we will see more slabs poured before the end of the year, protecting jobs across the economy in manufacturing, retail and professional services,” Mr Reardon said.

Western Australia had the largest monthly increase in June compared to May 2020, rising by 211.2%, followed by:

How much of this growth is driven by HomeBuilder?

It still might be too early to truly tell how much of an impact HomeBuilder has had, as the numbers on how much it's been used are still a while away yet.

One of the biggest criticisms of the scheme when it was announced was its limited scope - it only applies to those who meet the following criteria:

Speaking to The New Daily in early July, AMP Capital senior economist Diana Mousina said the scheme would do little to help with falling construction numbers.

“I just don’t think that there will be enough interest in the program to really generate enough increase in construction to offset all the negatives,” Ms Mousina said.

“It will help people who were already in the market, but I don’t know if it will actually encourage people to go into the new housing market.”

[Read: 'Outraged': How HomeBuilder has failed this rural Aussie couple]

However, research by REA Group shows buyer appetite is still surging, with enquiries to developers rising by almost 63% in June after a 54% rise in May.

“Not surprisingly, land estate enquiries have recorded the largest jump over the month, up 93%, followed by a 29.4% increase in apartment leads and a much lower 4.3% lift in enquiries for new retirement properties,” Mr Kusher said.

“I expect to continue seeing high levels of enquiry to developers as buyers look to capitalise on government incentives and [record-low] borrowing costs that are currently available.

“It’s no surprise that land estate new development is benefiting from HomeBuilder, given the package is geared towards new builds, there are restrictions on construction time frames that inhibit apartment development, and the Australian dream is to own a house.”

REA's data shows enquiries for land estates have jumped by more than 222%, while apartment enquiries are 79.1% higher.