The case for – and against – allowing pets in your rental property Photo by Nikki Franklin on Unsplash

To allow pets, or not to allow pets? That is the question for many property investors.

The average number of pets per household

Australians are among the most pet-loving people on earth. According to research from Animal Medicines Australia, 62% of households contain at least one pet. This percentage is only higher in the United States (64%) and New Zealand (64%). 38.5% of households have a dog,

29.2% have a cat and the remainder have either fish, birds, reptiles or small mammals such as mice.

In 2016, the official number of pets residing in Australia was 24.1 million from 5.7 million households. This was a few years ago now, so the number of pets has probably increased even further, placing it at around the same point as our national population (25 million).

That’s a lot of pets to go around, but for renters, it’s pretty hard to find a suitable residence that allows their furry friends to live there too. A search of realestate.com.au in Brisbane, for example, shows just 22% of advertised rental properties classified as pet-friendly. Nationwide, the RTA (Rental Tenancies Authority) says that figure is just 10%.

Tenants with pets: a landlord dilemma

If you’re a property investor, you might have already have come to one of the following conclusions about whether to allow renters to have pets in your property:

The truth is there are reasons both for and against allowing pets in your rental property, which we’ll explore below.

Why you should allow pets in your rental property

There are six key reasons why you might consider allowing pets:

Australian research has found tenants with pets are often willing to pay more rent than those who don’t – between 7% and 14% more in some cases. Animal Medicines Australia’s report found 31% of pet owners would be willing to pay more in rent or fees.

This is because the lack of pet-friendly accommodation can make pet owners more desperate to find a place to live. So if your investment property is proving to be quite popular with a bunch of different applicants, the ones with pets could be more likely to high-ball you with an offer above the advertised rent.

Also, landlords in Western Australia can actually request a ‘pet bond’ or pet deposit of up to $260, but this isn’t permitted for service dogs.

Domain’s house price report for December shows the average weekly rent for houses in Australian capital cities is $446. An extra 14% would up this amount to $508 – that’s about $3,250 extra per year. Wouldn’t that be nice?

2. You open up a larger rental pool

And with more applicants comes less time spent on the market for lease. The American research reported that pet-friendly rentals are leased out within an average of 19 days compared to 29 days for rentals that aren’t pet-friendly due to the imbalance of pet owners to pet-friendly accommodation. This could also help reduce your advertising spend on finding new tenants.

Note: this research is from 2005, so it’s possible attitudes towards pets and renting have shifted slightly since the report was published.

Once they’re moved in, pet owners also tend to stay bunkered down for a while…

Again, the difficulty of securing pet-friendly leases can create complications for certain tenants, which means they’re much more likely to stick around for an extended period of time. US research found those with pets stayed in their rental properties for an average of 23 to 46 months. Pet-free tenants meanwhile only stayed for an average of 15-18 months – that’s less than half the time in some cases.

Young, pet-less tenants are more likely to jump around as they look to trial new places to live, get new jobs or move in with their partners, whereas pet owners are more likely to be settled already. So if you hate the hassle of finding new tenants every 12 months, opening your doors to pets could remedy this.

4. You may attract a higher-quality tenant

There’s a whole host of information out there suggesting that the average pet owner has it together more than people without pets. Based on some quick research:

A tenant who feels more at home and has their health and finances in order is more likely to stick around, and they’re also more likely to be responsible. Obviously, this isn’t true for every pet owner – there are a lot of people who don’t take any responsibility for their pets – but 91% of pet owners consider them to be a part of the family.

5. You can help curb animal euthanasia

Ok so this one isn’t directly related to your rental property, but by allowing pets you can do a bit of good.

According to the Australian Veterinary Association, 30% of dogs and cats that were abandoned by owners in 2017 were given up due to accommodation issues. Dogs Victoria also conducted a survey that revealed over 40% of dog owners had trouble renting. Another 30% of the animals surrendered to shelters were out there because their owners couldn’t find a place to house them.

Unfortunately, a large number of these animals have to be put down due to overcrowding in animal shelters like the RSPCA. More pet-friendly housing can help stop a lot of these pets from being euthanised.

6. Tenants may ignore your rule against pets anyway

Research from the University of Western Sydney indicates 11% of pet-owning tenants did not tell their landlord or body corporate about their furry roommate.

Tenants having a secret pet can lead to all sorts of complications, but this isn’t a reason alone to allow pets. If you don’t want to allow pets then you don’t have to, but just know there’s a chance tenants will go over your head if they really need to, so at least being aware of their intentions to have a pet and making some concessions can be easier in the long-run. 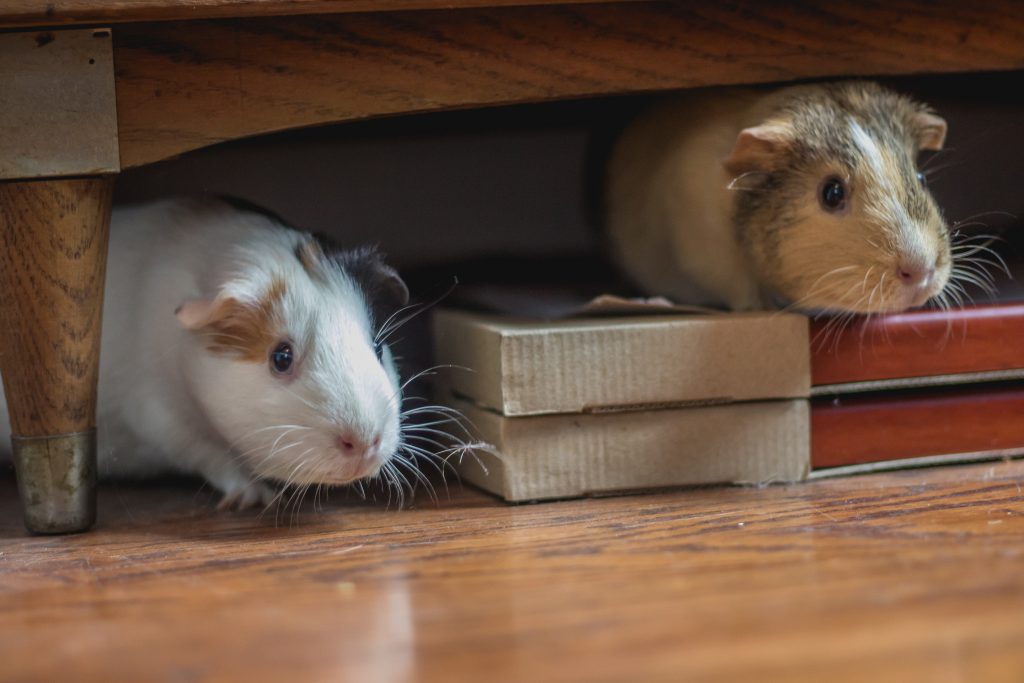 Why you shouldn’t allow pets in your rental property

Now let’s cover the other side of the argument:

1. They can cause damage

The potential for damage caused by pets is obviously pretty extensive – they can do anything from scratching walls, urinating on carpets, chewing couches and knocking over expensive ornaments. Speaking from experience, my dog dug up an NBN cable as a puppy. They can also attract fleas, which nobody wants.

Various studies in the US found the average dollar cost of damage caused by pets to houses can be anywhere from $US390-$430, which would be about $600 in Australian dollars. Bear in mind that this is over the course of one year, and is only slightly more than the average weekly rent here – you could make that amount back in less than a fortnight, and chances are your tenant’s bond will cover that anyway.

There’s also landlord insurance to factor in, which can cost more if you allow pets.

2. They can disturb the neighbours

Noisy animals are one of the biggest sources of neighbour complaints.

Although you’re not responsible for the actions of your tenants, consistent noise complaints from neighbours can get the council involved. You don’t want to harm your reputation as a property owner.

Pets in rentals: an expert opinion

Savings.com.au caught up with Jane Slack-Smith, investment property expert and Author at Your Property Success to hear her opinion on allowing pets in rental properties.

From her experience, she is generally against it.

“I have allowed pets in my property before and there is typically always damage and additional maintenance needed,” she said. “If the new legislation removes my ability to not have pets I would increase the rent and bond to reflect the extra costs and wear and tear.”

“I have done a property inspection where the tenants asked me to remove my shoes and then I repeatedly walked on wet carpet where a friend’s little dog who was visiting for a few weeks whilst they were away had peed repeatedly. We asked for it to be removed.”

Ms Slack-Smith also says that ‘pet-proofing’ can’t really be done – you can just do things like increase the bond or charge extra rent to reflect extra costs.

“I respect that many people want pets and it is possible to get a higher rent and longer tenancy but you need to weigh up the costs carefully.”

Screening the bad pet owners from the good can minimise damage and costs.

How to screen bad pet-owners

One of the best ways to separate the good pet owners from the bad is to actually meet the animal first hand yourself. Ask prospective new tenants yourself to bring the pet along to inspections or arrange a meeting between them and yourself/your agent and watch its behaviour:

You should also ask the tenant the following questions:

If the tenant in question is an existing one, you can use your own knowledge of their character to make a judgement call.

You can also request a ‘pet reference’ or ‘letter of recommendation’, which can include written recommendations from previous landlords or neighbours as well as photos of the animal with some basic information about it.

There is a huge number of pet owners in Australia at the moment, and the number of people looking to rent is only going to increase – 61% of current renters say they want to own a pet in the future (Animal Medicines Australia).

The majority of landlords who’ve cited issues with animals have never actually experienced any problems themselves. In fact, two-thirds of them worried about pets causing damage are relying on either anecdotal evidence from the media or other landlords for their stance. In reality, there are far fewer cases of pets causing damage to property and neighbours than you’ve been led to believe, according to the aforementioned US study.

This study came to the conclusion that “there appears to be an overlooked opportunity for landlords to gain income revenue in rent and increase tenant pools by allowing pets. From a landlord’s perspective, while there are some costs to allowing pets, these costs are relativity low and the benefits appear to be even greater”.

In the event where pets have done damage, the cost to repair was often minor to the point where it was covered by the tenant’s security bond. In exchange, landlords can secure longer-lasting tenants and the possibility of hundreds if not a few thousand dollars extra in rental income. And remember: just because you advertise a place as pet-friendly doesn’t mean you’ll only get pet-owning applicants wishing to rent it. You can choose non-pet owners that apply if they’re a better fit.