National median house prices saw their steepest quarterly increase in almost 18 years in the March quarter, according to the Domain House Price Report.

Median house prices reached a new record high $899,509, up 5.7% from the previous quarter, and house prices in every capital city except Perth and Darwin hit record highs in the three months to 31 March.

This is the first time Domain has reported that house prices have risen simultaneously for two consecutive quarters since 2009, after the Global Financial Crisis (GFC).

It also follows recent research from CoreLogic which found March was the strongest month for house price growth in 32 years, reaching a quarterly growth rate of 5.8%. 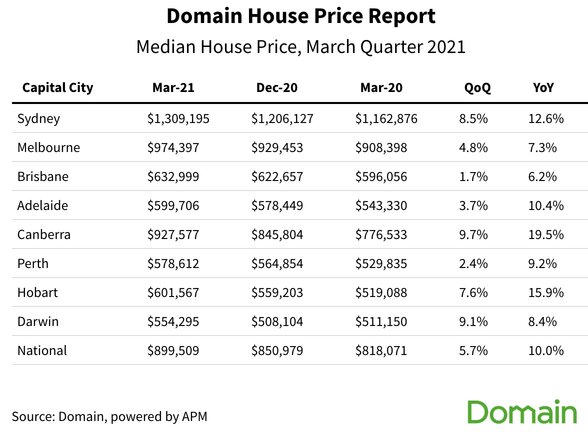 "It is the first time in a year that price growth across the combined capital cities has outperformed regional areas."

Sydney and Melbourne recorded their fastest median house price increases in nearly 30 years, up 8.5% and 4.8% respectively.

According to Dr Powell, owner-occupiers had been the driving force behind the growth, but the market is forecast to slow over the year.

"This rapid quarterly growth isn’t likely to continue. Prices will still grow but it is unlikely to stay at such sustained growth rates over each quarter," she said.

Property markets in South-east Queensland surged in popularity through COVID, and the March 2021 quarter was no exception.

Brisbane, the Gold Coast, and the Sunshine Coast were all standout performers, with house prices hitting record highs in each location.

"Changed lifestyle preferences post-lockdown and the option of remote working has driven demand to south-east Queensland as buyers are drawn by affordability, liveability, climate and greater value for money,” Dr Powell said. 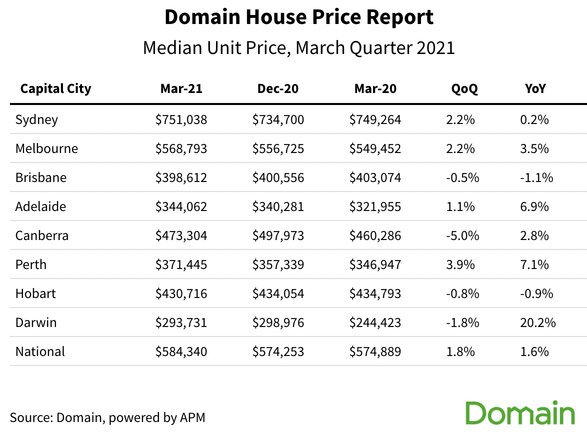 An end to eviction moratoriums is likely to increase investor activity, according to Dr Powell.

"Adelaide has always largely been an owner-occupier driven market, therefore less exposed to the retreat of investors," she said.

"That said, investors are starting to return, and the lower purchasing price, tight rental market and ending of the rental moratorium could draw more investment activity to South Australia."

In the nation's capital, Canberra house prices breached $900,000 for the first time.

Perth and Darwin, the only two capitals to not record new record-highs for house prices, still saw prices hit their highest point in five years and four years respectively.

Dr Powell said Perth and Darwin benefitted from lower prices compared to the rest of the country, which could appeal to owner-occupiers and investors.

"Setting Perth apart is the affordability factor, with homeowners aware prices are below peak but rising, creating pressure to purchase before they accelerate too far."