Notable increase in people wanting to sell their home A recent report from Westpac reveals a marked increase in the proportion of home owners looking at selling in the next five years.

Nearly four in ten (39%) are thinking of listing their home for sale in the next five years, an increase from 30% in November 2020.

That's based on a survey of 2,017 Australians, which also revealed more than a quarter (26%) would sell to downsize.

The research comes after home prices recorded their greatest quarterly rise in more than a decade.

There are now more than 200 suburbs across Australia where the median house price is $1 million or more.

The divide in wealth between home owners and non-home owners is also growing, with the average wealth of Australian households at nearly half-a-million dollars thanks to a surge in property prices.

Credit Suisse research earlier this month also revealed that one in 10 Australians are now 'millionaires' due to home ownership.

However, the home selling intentions could be a positive for home buyers, according to Westpac's managing director of mortgages Anthony Hughes.

"In welcome news for buyers, the report also found more people are now thinking about selling. This is largely being driven by confidence in getting a good return on their home, as well as an increasing desire to live in a new area as people seek more living space," Mr Hughes said.

"Properties further from the city boasting backyards and a more relaxed lifestyle remain top of mind for buyers, and for the first time, more homeowners are telling us increased infrastructure and amenities in their desired area is also motivating them to sell, with public transport, local shops and parks ranking as the most desirable suburban features."

Numbers crunched by buyers agency Propertyology showed the push for a regional move preceded covid, with more than 130,000 people relocating from capital cities to regional areas in the five years to December 2020 (chart below).

The Westpac survey also revealed the majority of first home buyers (71%) are looking to buy a house or townhouse, with 62% wanting at least three bedrooms. 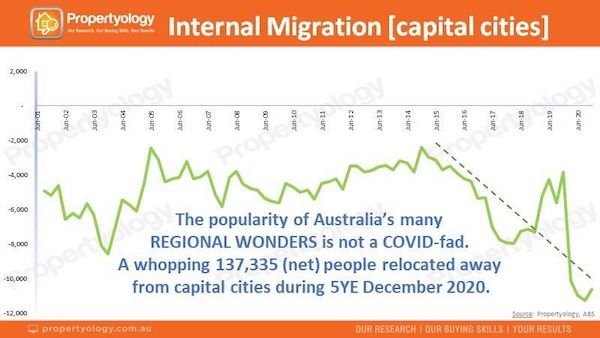 Competition, and lack of listings, turning off first home buyers

Fewer Australians are looking at buying their first home in the next five years, dropping from 22% to 19% since February this year, according to Westpac's survey.

Competition with other buyers remains a 'top challenge', with 43% regarding this as the primary turn-off.

Nearly three in ten (29%) also cited a lack of listings as a barrier to achieving home ownership - this is up from 19% three months ago.

"While the report found houses are most in demand, units and apartments still remain a popular option – particularly among younger buyers who are more likely to seek the convenience and access to local cafes, restaurants, and bars, as well as downsizers who might be seeking a coastal lifestyle," he said.

Westpac research also revealed the top suburbs home owners are likely to sell in over the next six months. They are:

Interestingly, both sets of suburbs in Sydney and Perth are 'blue chip' suburbs, as opposed to the other three cities which feature a mix.

According to REA Group, the median price in Avalon Beach for a house is more than $2.5 million.

Mosman Park in Perth has a median house price of nearly $1.6 million, while Hamilton Hill has median unit price of just over $520,000.

Photo by Jeremy Zero on Unsplash