Home / Home Loans / Will the RBA change the cash rate in February?

Will the RBA change the cash rate in February? The central bank board meets today to discuss whether they will alter Australia's cash rate.

Given the Reserve Bank's (RBA) correspondence it won't change the cash rate for at least three years, it seems nigh impossible we'll see any movement when the Board meets this afternoon.

The RBA has ruled out negative rates, stating the cash rate is at its effective floor after taking the rate to a record low of 0.10% in November.

[Related: See if your lender passed on the cash rate cut here]

The central bank has also said it won't hike rates until progress is made towards full employment and inflation sits within its 2-3% target range.

Figures from the Australian Bureau of Statistics (ABS) released last week saw inflation rise to 0.9% in the December quarter, meaning inflation has not sat in the target range for five years.

NAB economist Tapas Strickland said the RBA would update its inflation and unemployment forecasts, given the rapid improvement seen in the economy in recent months.

"The unemployment rate has declined to 6.6%, a full six months ahead of the RBA’s upside scenario," Mr Strickland said.

"We expect forecast upgrades (note the forecast period will be extended to mid-2023) with market focus on the inflation track.

"Given the improvement seen in the economy, there is the possibility the revised upside scenario has core inflation back within the 2-3% band.

"This would be important for markets in trying to judge when the RBA is likely to eventually hike cash rates."

More attention may be given to other RBA events this week than today's Board meeting, with RBA Governor Phillip Lowe making a speech on 'The Year Ahead' on Wednesday, before making his Parliamentary Testimony on Friday, and updated key forecasts released in the Statement on Monetary policy, also on Friday.

With the cash rate unmoved until at least 2024, according to the RBA, attention is now turning to its quantitative easing (QE) program.

The program is due to expire in April, with NAB and Westpac forecasting an extension, and the RBA's thinking expected to be revealed by Governor Lowe this week.

"Additionally, the RBA’s 3 year YCC target which is tied towards not lifting rates for three years will also need to be reviewed by mid-2021 given nearly a year has passed since it was first implemented."

Despite the RBA's stance on not hiking rates until at least 2024, a survey of economists by The Conversation found the majority forecast rates would be hiked prior to this. 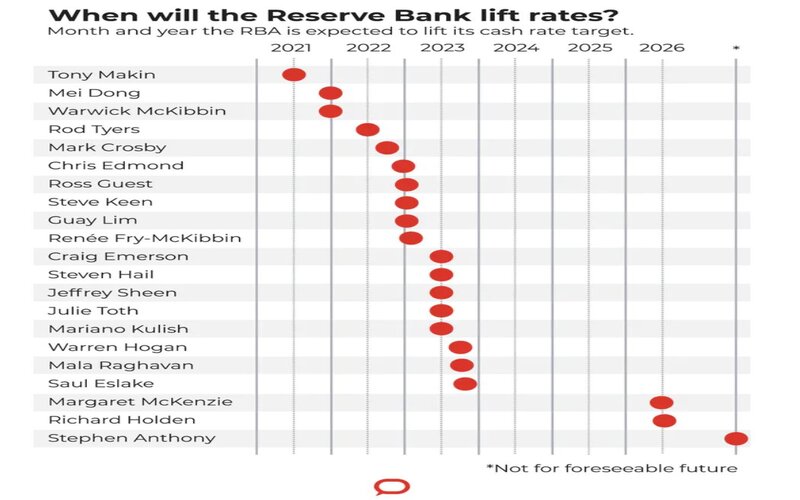 Panelist Mark Crosby told The Conversation that rising home and other asset prices would put the bank under pressure on its commitment in the knowledge the economy is in a position to withstand more normal rates.

Those surveyed thought it would be some time before full employment (4.5-5%, according to the RBA) was reached, with the unemployment rate average forecast for December 2022 being 6.1%.

Photo by Jess Bailey on Unsplash