Women lag behind men when it comes to home ownership Australian women have lower rates of property ownership than men, as a new report highlights the impacts of the gender pay gap.

CoreLogic's inaugural Women and Property: State of Play report, released on International Women's Day, found 26.2% of all properties in Australia are exclusively owned by women.

"Unsurprisingly, the report found that rates of male property ownership are generally higher than women, but with important distinctions that highlight the relationship between the gender wealth gap and the gender pay gap, and have implications for institutional response," Ms Owen said.

"CoreLogic estimates Australia's residential real estate to be worth over $7 trillion.

"Given there's a high level of equity held in real estate, if you don't own property, that's a big source of household wealth and security you don't have access to."

The report found the most common type of property ownership was 'mixed gender' ownership, where both men and women had ownership of the property, which accounted for 43.9% of properties in Australia.

"The other element of this is that lone households would have less success getting into the property market. What's important about that, when it comes to women and real estate, is that women make up over 60% of either single-parent of lone adult households.

“The core of this analysis and its findings is that it’s all about wealth inequality and income inequality, and that doesn’t just span between men and women, it spans among women as well - including those that are single, sole parents or part time workers.”

See also: How to get a home loan on a single income 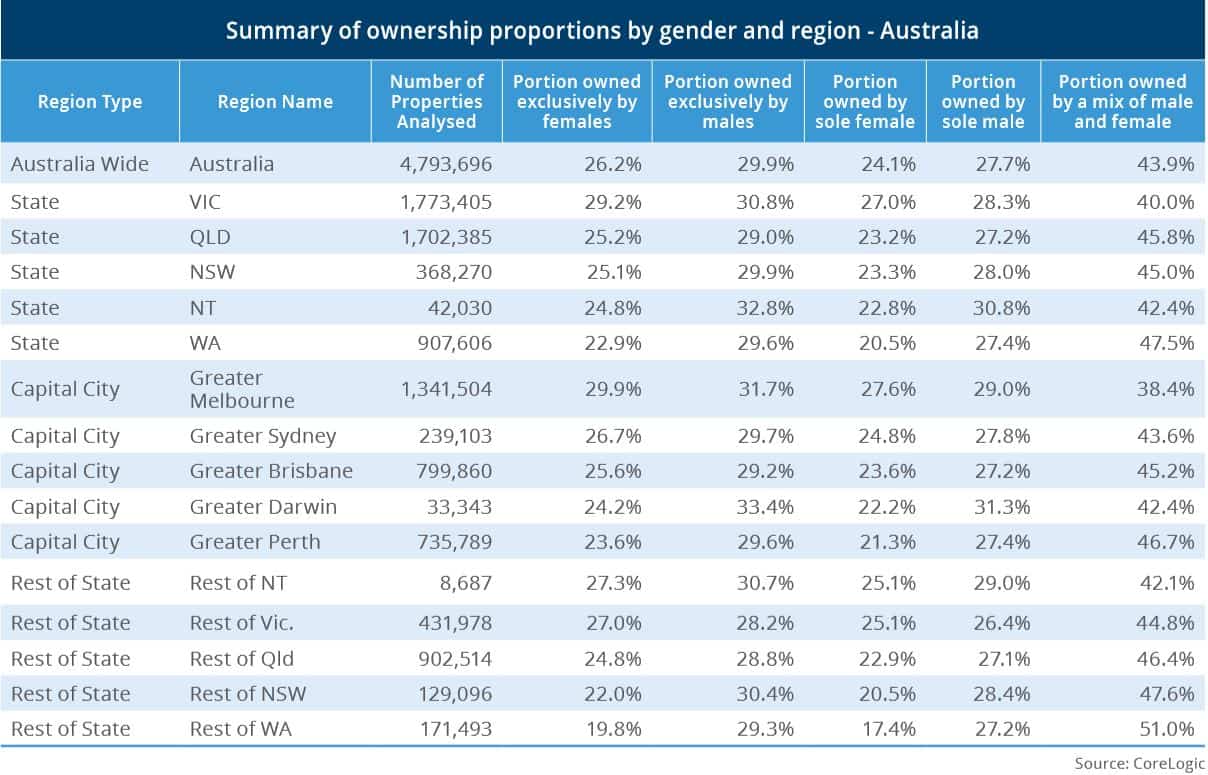 The highest rates of exclusively female home ownership was in the eastern suburbs of Sydney, where 34.8% of all properties were owned exclusively by women compared with 31.7% of men.

In Melbourne's inner south, 32.6% of property is exclusively owned by women and 27.6% are owned by just men.

"Where women have higher incomes, they may have a greater propensity to buy property, in some instances even outpacing property ownership rates of males," she said.

"This compliments previous research findings on this topic, which have shown that in some instances, women actually have a greater tendency for property ownership than men, given equal income."

See also: Women's guide to managing money at every age

Women taking longer to save for their deposit

The report found that it would take an additional 10 months for women to save a 20% deposit on the median Australian dwelling value, based on average weekly full time earnings data.

"We know there's a gender pay gap, and that income is an important determinant of access to real estate ownership."

According to the Australian Bureau of Statistics (ABS) the gender pay gap is currently sitting at 13.4%.

"It’s also important to note that Australia measures the gender pay gap by average weekly earnings for full time employees, however women represent 67.2% in the part time workforce and only around 37.9% of the full time workforce," Ms Malev said.

"This suggests the true gender pay gap in Australia is actually closer to 30% because of the different composition of men and women in the labour force.

"The implications of this are vast. It means men get access to housing sooner, they have more time in market, and therefore have greater wealth accumulation as well."

With property ownership being regarded as a pillar of retirement, the gender wealth gap means women are at a greater risk of poverty in retirement.

"This wealth gap becomes a particular challenge around retirement, and it’s well documented that if you still have rental or mortgage costs at the time you retire, then you have a much higher incidence of falling into poverty," Ms Malev said.