The new serviceability buffer comes into effect Monday, and a number of banks have already made moves to account for the situation.

The prudential regulator's serviceability buffer will officially get bumped from 2.5% to 3.0%, explained further here, and a number of banks and lenders have responded by already adhering to the guidelines, while also hiking home loan interest rates.

From Friday, Westpac and Bank of Queensland will use the new buffers when assessing borrowers' capacity to repay their home loans.

The buffer will also apply to Westpac subsidiaries St George, Bank of Melbourne, and BankSA.

On a home loan with an advertised interest rate 2.00% for example, banks will now use a serviceability rate of 5.00% (2.00% plus 3.00% buffer) to assess a borrower's capacity to repay the home loan.

Non-banks aren't subject to the rule, and instead will continue to use ASIC's mandated 2.50% buffer.

While banks can set their own serviceability floors - CBA's is 5.25% - it's expected APRA's buffer bump will lower 'average' borrowing capacity by 5%.

However, Godfrey Dinh - founder and CEO of proptech platform Futurerent - said for many borrowers, it could be a lot more than that.

"Our analysis shows that in practice, there's more to the 3% serviceability buffer than meets the eye, particularly for the 2.2 million Australian property investors," Mr Dinh said.

"By making it tougher for people to access financing, these changes will further entrench the disparity between those who already have property and finance, and those who are still in the wealth creation stage of their lives."

Futurerent found that for an 'average' family with one investment property as well as their own and an annual household income of $177,424, their borrowing capacity could fall by 11.8%. 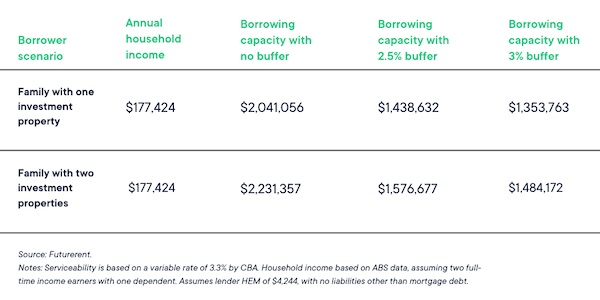 "By changing the goal posts again, the banks are knocking back responsible borrowers for loans they can actually afford, and, in many cases, this is actually costing borrowers real money," Mr Dinh said.

"Timing is everything and there are real costs to delaying your property purchase plans because of the new stricter stress test."

However, APRA's new rule is designed to hit those who borrow more, and who borrow 'at the margins', particularly investors.

Westpac's head of credit strategy, Brendon Cooper, said the buffer bump is preferable to other 'macroprudential' policies as it won't affect owner occupiers as much.

"One of the notable features of the current increase in house prices has been the dominance of owner occupied lending and APRA is now setting itself to rein in any further pressure that may be applied as investor growth accelerates," Mr Cooper said earlier in October.

"Lifting the buffer on a product basis is far more targeted toward investors."

The major banks have all increased fixed mortgage rates, largely consistent with each other, in the past few days.

"Our lender data shows that although the official cash rate has not moved since November 2020, within that same period we have seen over 1,000 rate changes and fluctuations across home loans, including a growing number of lenders increasing their fixed rates in recent times," Mr Hyman said.

"Homeowners need to understand that if they remain complacent and simply rely on the RBA rate announcements as an indicator, they are likely to find they have missed the moment when it comes to making the most of the current lending conditions and highly competitive fixed interest rates."

Photo by Mariano Carpentier on Unsplash