According to a non-bank lender executive, the RBA's COVID support for big banks fuelled the most recent housing boom.

On Wednesday, APRA bumped up the serviceability buffer for authorised deposit-taking institutions, or ADIs, at the exclusion of non-banks.

However, CFO of non-bank lender Firstmac, James Austin, suggested clamping down on the non-bank sector right now would be misguided.

"Much of the housing boom currently being experienced is as a direct result of the Term Funding Facility provided to ADIs," Mr Austin told Savings.com.au.

"This was cheap - only 0.10% - funding from the RBA to ADIs for a period of three years. The ADIs have used this money to offer cash upfront offers and cheap fixed rate deals.

"This cheap housing finance has caused housing prices to explode. The non-banks were not eligible for TFF access, and so only the ADIs are responsible for the current outcomes in the market.

"It is therefore appropriate that non-banks have been excluded from the current regulatory action."

In an explanatory note, APRA said it also does not consider there to be a basis for increasing the serviceability rate for non-banks.

"APRA can only make rules in relation to non-ADI lenders if those lenders are considered to materially contribute to risks of instability in the Australian financial system," the note said.

"APRA is closely monitoring trends in non-ADI lending, but ... non-ADI lenders currently account for a quite small share - less than 5% - of total housing lending."

A similar rule that non-bank lenders are subject to is ASIC's responsible lending servicing buffer - currently set at 2.50% above the loan rate.

The $200 billion-plus program now makes up about 25% of the Reserve Bank's total balance sheet (as seen in the chart below). 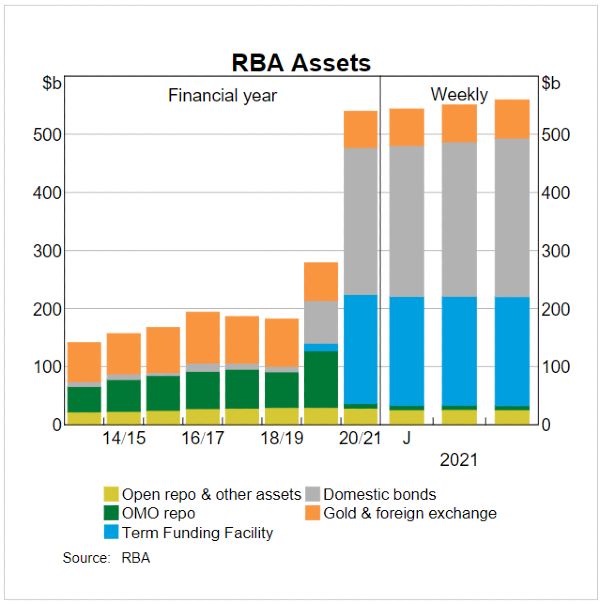 However, in its assessment of the TFF, the RBA said the program lowered funding costs for non-banks too, as it led to lower funding rates on wholesale markets.

"The estimated cost of sourcing three-year unsecured funding in domestic wholesale debt markets for the major banks was around 0.6% at the end of June 2021, compared with 0.1% for TFF funding," RBA economists said.

The 'spread' on Residential Mortgage Backed Securities is also at its lowest level in more than a decade, according to the TFF assessment.

"Non-bank lenders have responded by issuing large volumes of RMBS, and their market share in housing lending has rebounded from the modest decline around the middle of last year," RBA economists said.

"If APRA is worried about serviceability when rates increase then it should be encouraging borrowers to take out fixed rate loans," Mr Tulip told Savings.com.au.

"Reducing the buffer for that portion of loans at fixed rates would be a good way of doing that. But APRA doesn't show signs of having thought about this.

"I think the real reason they are doing this is paternalistic: protecting borrowers from their own recklessness.

"People disagree on the merits of that, but what is not controversial is that this is a 'second best'."

Governments have also encouraged lending and property purchasing by introducing stimulus such as Homebuilder, the First Home Loan Deposit Scheme, and the Family Home Guarantee.

"The share of lending to first-home buyers has increased significantly on the back of HomeBuilder, the federal government’s First Home Loan Deposit Scheme, and individual state government incentives," Mr Kusher said.

"Given improving home ownership rates is the goal of these government schemes, it seems counterproductive to limit first-home buyers by reducing their ability to borrow."

Mr Tulip, too, said this was a favourable alternative.

"There is a paternalistic rationale for the interest buffer: APRA would argue that this is sensible practice," he said.

"There is not even a paternalistic rationale for a DTI limit. As interest rates fall, higher DTIs are sensible and efficient."

Photo by Andy Wang on Unsplash