The latest 'VFACTS' data shows the first decline all year for new cars sold while used car prices are tapering off but remain elevated.

"Automotive manufacturers like all those in the global manufacturing sector are dealing with a microprocessor shortage which is leading to longer wait times to get products to market," FCAI chief Tony Weber said.

"Australians are continuing to purchase vehicles, and car makers are working to deliver products to our shores."

A boost for electric vehicles

Mr Weber said this can be attributed to supportive state government programs.

"We have seen Victoria and NSW release comprehensive legislation to support electric vehicles which was followed just last week by South Australia," he said.

"All of these jurisdictions worked proactively with industry to provide infrastructure investment and consumer incentives." 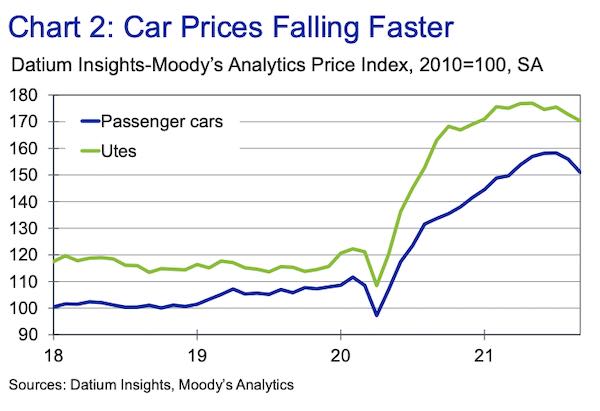 Is this the start of the end for expensive used cars?

Prices dropped in August and September - the first month-on-month drop since April 2020 - falling by 5% since the peak in July 2021.

"For every vehicle not bought, there is one fewer traded in. Additionally, the lost kilometers driven because of lockdowns and work from anywhere have caused less need to turn over fleets and purchase new inventory."

Mr Brisson said used-vehicle prices are expected to be relatively steady until mid-2022 when supply-chain issues  in the new vehicle market are worked out.

"Until then, elevated used-vehicle prices will continue to be the somewhat new normal."

Moody's Analytics highlighted where not to find a bargain on a used car - utes and SUVs.

"A 2020 Toyota Hilux that has been driven 15,000 kilometres per year starting in January 2020 is worth the same amount today as the day it was driven off the dealer’s lot," Mr Brisson said.

"Prices have dropped faster for passenger cars compared with trucks, SUVs, and utes.

"Nevertheless, prices remain elevated for both segments, with cars up 35% since the pandemic started and utes gaining 39%.

"The strength of utes is being propelled mainly by a dearth of inventory for larger vehicles.  A lack of inventory has kept prices steady despite headwinds from rapidly rising fuel prices"

Photo by Gregory Atkats on Unsplash