Home / News / Have we reached the peak of the housing boom? New data from SQM Research indicates we may soon reach the peak of the housing market with prices to taper next year.

SQM's 'base' scenario involves a slower rate of price rises over the first quarter of 2022, followed by price falls as early as mid-2022.

The base scenario involves the RBA's cash rate remaining at 0.10%, quantitative easing scaled back as planned, headline inflation staying at 3%, and further prudential regulation by June 2022.

This could see prices fall in Sydney by up to 2%, in Melbourne up to 3%, and Darwin up to 4% while other cities will be more resilient.

Brisbane looks set to be the strongest city in the base scenario, with price rises anywhere from 8% to 14% despite market headwinds.

Other forecast scenarios are seen in the chart below.

"However, we may also be recording some seasonality and pent-up selling after vendors held off listings during the lockdown.

"Nevertheless, we expect the market to peak in 2022, with further expected intervention by APRA, which could come as early as next month, halting the price momentum."

Mr Christopher said APRA will continue to "intervene" in the market until prices cool.

"We cannot afford another year of 20%-plus gains across the national housing market," he said.

"And so, to ensure a soft landing for the market, it is best we see additional intervention sooner rather than later to reign in property valuations."

The research house also forecasts the cash rate to stay on hold until at least late 2022, with further prudential action occuring as early as December. 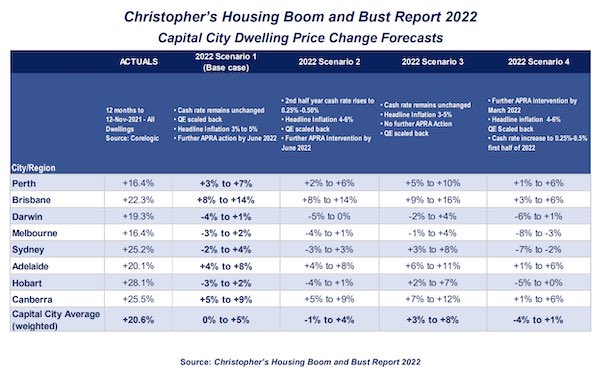 These forecasts were echoed by WLTH's national lending manager, Chad Hoy Poy, who said interest rates - both RBA and market - will be "significant to developments" in price performance.

"Aspiring homeowners looking to invest in the coming months should expect the market to free up as the supply-demand balance will help the market slow," Mr Hoy Poy said.

"This market movement occurs as affordability constraints begin to bite and macroprudential tightening fastens its grip. We can see this in the downward trend of first home buyers in the last few months.

"As the market changes, so do buyers' behaviour, causing many to reevaluate their circumstances and whether owning property is wise."

The major banks have released their property price forecasts, with CBA having the most bearish tip with 10% price falls in 2023.

Such forecasts drew the ire of property analyst Simon Pressley, who on Monday said these predictions are near meaningless.

"I read [the report] three times to make sure of what my eyes were seeing. CBA has actually given their reasons for property price declines as 'increased employment and wage growth'," Mr Pressley told Savings.com.au.

"That's a statement for the ages."

"Society is fast turning into a bunch of sooks. Australia is fast approaching full unemployment for the first time in decades, wage growth prospects are rising with it, infrastructure investment is a record high, there's lots of industry stimulus, and households have more cash squirrelled away than ever. Why the negativity?" Mr Pressley said.

"They are strong fundamentals for property markets. Even if there was a handful of interest rate rises over the medium-term, the cost of money will still be ridiculously cheap. And we have a record low volume of housing supply for sale.

"Sounds damn good to me."

CoreLogic's auction preview shows this upcoming week will be the busiest for the combined capitals since its records began in 2008.

All up 4,354 homes are scheduled for auction, marking the first time volumes have exceeded 4,000.

"Compared to last week, this week’s volume of auctions is set to be up 17.0% - 3,720 - and more than double the number recorded this time last year - 2,168," CoreLogic research analyst Kaytlin Ezzy said.

However, when auction volumes increase, the clearance rate generally falls.

Adelaide was the only capital to record a clearance rate above 80%.

Photo by Gerda on Unsplash