According to the PropTrack Home Price Index, home prices fell nationally in June by 0.25% although prices are still up by 34% since March 2020.

Sydney and Melbourne were the two cities with the leading price decreases of 0.4% and 0.6% respectively.

In Sydney, property prices are now 1.5% below the peak seen in February 2022 with annual price growth at the slowest rate seen since October 2020.

Melbourne property prices fell for the fourth consecutive month in June with prices now 1% below the peak in February 2022.

Australia’s third largest capital city, Brisbane, experienced its first fall in property values since April 2020 with a decline of 0.09%.

Despite this, data shows Brisbane is still the strongest market over the past year and will continue to outperform other markets in the near future.

“Hobart and Adelaide were the strongest performing capitals over the month, both reaching new price peaks,” Mr Ryan said.

“The biggest slowdowns have been in the most expensive markets of Sydney, Melbourne and the ACT.

“Affordable lifestyle regions of Brisbane, Adelaide, regional QLD and Tasmania have continued to grow, but the slowdown is spreading to these markets, with Brisbane posting its first small fall since the pandemic began.” 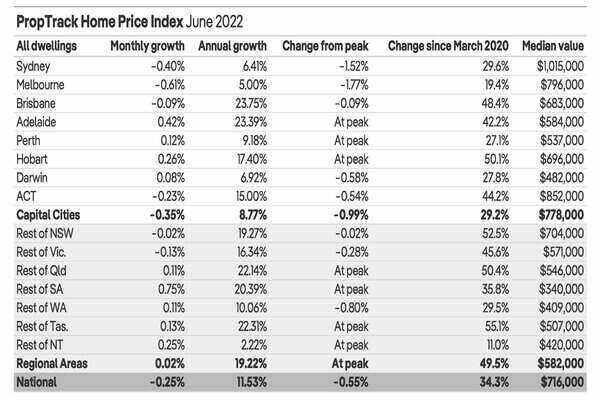 A rival report by CoreLogic’s Home Value Index found that housing prices fell across the country by 0.6% in June with Sydney (-1.6%) and Melbourne (-1.1%) leading the charge.

“Considering inflation is likely to remain stubbornly high for some time, and interest rates are expected to rise substantially in response, it’s likely the rate of decline in housing values will continue to gather steam and become more widespread.” 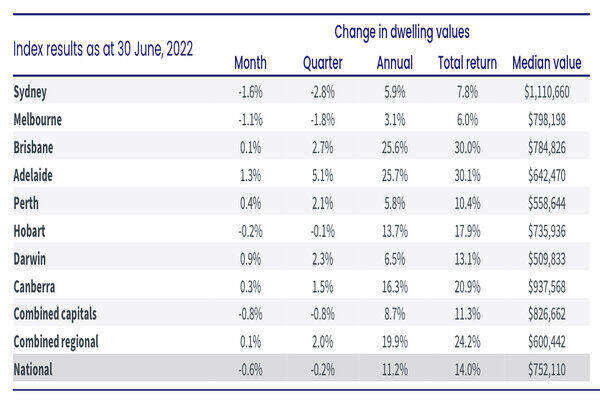 Although home sales nationally through the June quarter were -15.9% lower than a year ago, they are still holding 13% above the previous five year figure.

The trajectory of property prices all depends on interest rates. According to Mr Lawless, it is possible the cash rate could increase beyond the pre-COVID 10 year average of 2.56%.

“Under this scenario, the average variable mortgage rate for new owner occupier loans would be approximately 4.96%, more than double the rates in April, adding roughly $720 per month to a $500,000 mortgage,” he said.

“The double whammy of high inflation is another factor likely to weigh on the household sector and ultimately housing demand.”

However, the future of housing values remains uncertain.

The CoreLogic report suggests a peak to trough decline of more than 10% is becoming more mainstream across the various private sector forecasts.

Rents rise across the country

CoreLogic data also revealed rents increased across the country by 0.9% in June.

“Such strong rental conditions through the current cycle have occurred largely in the absence of overseas migration, although the reopening of international borders is likely adding further upwards pressure on rental demand," Mr Lawless explained.

"A reduction in average household size through the pandemic helps to explain such high rental demand during a time of closed international borders."

With rental markets expected to remain tight, it is more than likely rent will continue to outrun growth in housing values.

Image by Belle Co via Pexels