Home / News / Sydney hit 'as hard, if not harder' than first lockdown as payroll jobs fall

Sydney hit 'as hard, if not harder' than first lockdown as payroll jobs fall The latest payroll data in Australia revealed a spike in people out-of-work in Sydney as the lockdown continues.

Payroll jobs fell by 4.9% in Sydney in the two weeks to 31 July 2021, according to the latest release from the Australian Bureau of Statistics (ABS).

This is estimated to represent almost 250,000 jobs lost during the ongoing Greater Sydney lockdown.

Westpac economist Justin Smirk said that Sydney is currently "being hit at least as hard, if not harder, this time than it was in early 2020."

"NSW construction payrolls were hit significantly harder this time compared to the lockdowns in early 2020." 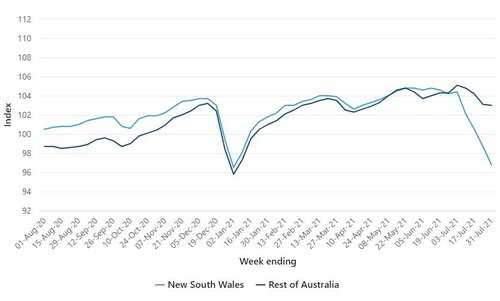 The absence of JobKeeper takes its toll

Previous lockdowns saw JobKeeper distributed to employees through their employers, meaning people were still being "paid" to work by their employer.

Mr Smirk attributed the new COVID-19 Disaster Payments, which now go directly to individuals and not employers, to the 'fall out' of the payroll job series.

"However, they will still be considered 'employed' in the Labour Force Survey, it will depend on how the employee defines themselves when responding to the LFS," Mr Smirk said.

He also said it's important to note that a payroll job represents employees that are paid through payroll, so if employees aren't paid by their employer during a pay period, they 'fall out' of the payroll series.

Payroll jobs down everywhere except WA

Payroll jobs fell throughout the country by 2% over the last two weeks, except for WA which remained stable.

Compared to the lockdown in early 2020, when payroll jobs fell a total of 8% in Sydney, there's been a further contraction of 8.9% this time around.

"So far, the pain in NSW has been more concentrated in Sydney than in the regions," Mr Smirk said.

Jobs in Victoria fell 1.3%, amid the state's fifth lockdown, though Westpac economists said they somewhat expected a 'bigger fall'.

Greater Melbourne's payroll jobs fell 1.3%, while the rest of Victoria was down 1.1%.

South Australia has also experienced a 'pronounced decline' in payroll jobs, down 2.7%.

Image by Drew Coffman on Unsplash