Photo by Dean Bennett on Unsplash

Australia's unemployment rate increased in May to 7.1% from 6.4% in April, seasonally adjusted.

The Australian Bureau of Statistics (ABS) figures are well above the market prediction of a rise to 6.9%, with 227,000 people losing their job between April and May.

ABS Chief Economist Bjorn Davis said more than 800,000 people had lost their jobs since the start of the pandemic.

“In two months, the percentage of people aged 15 and over employed in Australia decreased from around 62.5% to around 58.7%.”

The unemployment rate would have seen a far larger increase if it hadn't been for a larger than normal amount of people leaving the labour force, as was the case in April.

This was reflected in a further fall in the participation rate, down 0.7 percentage points to 62.9%.

This is the lowest participation rate in almost 20 years, with the rate not dropping below 63% since January 2001.

Prime Minister Scott Morrison said as dismal as the figures were, they were expected.

"As heartbreaking as all of these stories are that are represented in these numbers, the sad truth is these numbers are not surprising in these circumstances," Mr Morrison said.

"These are not just numbers. These are our friends, family members, workmates and neighbours." 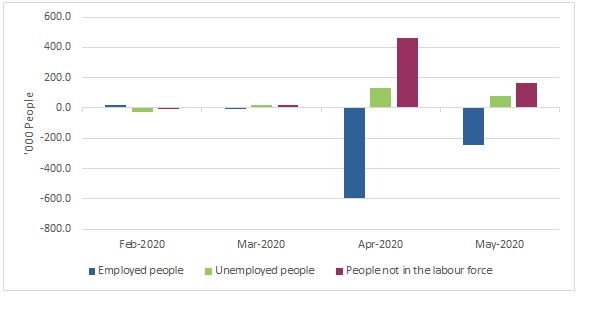 "The ABS estimates that a combined group of around 2.3 million people - around 1 in 5 employed people - were affected by either job loss between April and May or had less hours than usual for economic reasons in May," Mr Jarvis said.

IFM economist Alex Joiner wrote on Twitter if the participation rate was still at its January high, unemployment would currently sit at 11.6%

The participation rate is down 3.2pp since January & sits at 62.85% a low last seen in late 2000. If the PR had stayed at January's high of 66.1% the unemployment rate would sit at 11.6% - arguably a truer reflection of the labour market dislocation currently occurring #ausbiz https://t.co/m926w71yxR

The underutilisation rate, which combines the unemployment and underemployment rates, rose to a new record high of 20.2%.

In May all states and territories recorded decreases in employment.

Despite the abysmal figures, Mr Morrison said the government was committed to reviewing the JobKeeper and JobSeeker schemes in July.

"We put our supports in place, income support, Jobkeeper and Jobseeker, and we put that in for six months so we would have that time to properly move for the next step, to change gears again, because anyone can tell you they know exactly what is going to happen in September, in this COVID-19 crisis, is having a loan of you," he said.

Westpac economist Justin Smirk said although the figures were worst than expected, the worst may now have passed.

"Looking forward it appears we may be past the worst for job losses and while it is unlikely we will see a significant improvement in employment any time soon, without a rise in participation it will be hard to get the unemployment rate as high as 8% in June," Mr Smirk said.