Photo by Glenn Carstens-Peters on Unsplash

With non-essential services shut down in April, ANZ job ads fell 53%, to be down 62.2% year on year.

The decline was almost five times the previous record monthly fall of 11.3% in January 2009 in the global financial crisis.

Job ads fell progressively over the month, adding to the evidence the downturn in activity is impacting businesses and the labour market at an unprecedented speed.

The ABS survey reported 47% of trading businesses made changes to their workforce in the last two weeks of March as a result of COVID-19.

Department of Social Services data found the total number of jobseekers (receipients of Newstart/JobSeeker and Youth Allowance) had increased by more than 530,000 in the six weeks to 24 April.

ANZ senior economist Catherine Birch said the economic fallout from the pandemic would continue for some time.

"Although we think the JobKeeper payment will flatten the peak in the unemployment rate to 9.5% in Q2, there will still be substantial loss of employment, hours worked and household income over the coming months," Ms Birch said. 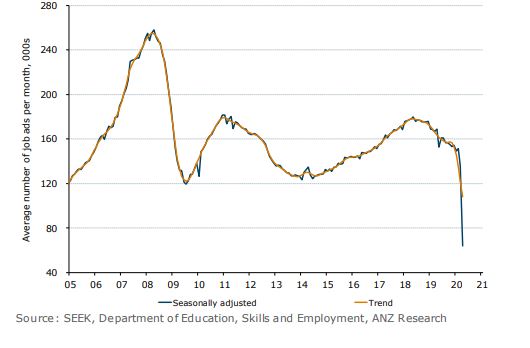 ABS Head of Industry Statistics John Shepherd said reduced demand for goods and services was expected to impact about seven in ten businesses (69%) over the next two months, while two in five businesses (41%) expect a reduced ability to pay operating expenses.

The survey also found that three in five (61%) businesses had registered or intended to register for the JobKeeper Payment scheme.

“Of those businesses registered or intending to register, 73% expected more than half of their employees to the eligible for the scheme,” Mr Shepherd said.

“The survey also found that of the businesses that did not intend to register for the JobKeeper Payment scheme, 55% reported that it was because the business was not eligible.

"Less than one in ten (7%) reported not registering due to insufficient cash flow to continue paying staff before JobKeeper payments commence.”

The ABS also found more than two in five businesses (44%) reported that the announcement of the JobKeeper Payment scheme influenced their decision to continue to employ staff.

A greater proportion of small (0-19 persons) and medium businesses (20-199 persons) (both 45%), compared to large businesses (200 or more persons employed) (32%), reported that the JobKeeper Payment scheme influenced their decision to continue to employ staff.

Businesses in accommodation and food services were the most likely to report the JobKeeper Payment scheme having influenced their employment decisions (67%).

Three in five businesses (61%) reported having registered or intending to register for the JobKeeper Payment scheme.