How the 2019-20 budget could affect your savings Middle-income earners, small business owners and recent retirees are the biggest winners from this year’s Federal Budget, at least in terms of savings in their pockets.

The 2019-20 Federal Budget was announced last night by Treasurer Josh Frydenberg, with the Treasurer going to great lengths to emphasise how the budget was ‘back in the black’, meaning it had hit a projected surplus for the first time in 12 years.

“The budget is back in the black with the Morrison Government delivering the first budget surplus in more than a decade,” Mr Frydenberg said.

“Surpluses will continue to build toward one per cent of GDP within a decade.

A surplus on the macro level is all well and good, but how does the 2019-20 budget affect the average person’s wallet and purse?

Essentially, there are five key areas outlined in this year’s budget that have the potential to affect everyday savings:

Middle-income earners were the big winners in this year’s budget, with the Coalition announcing a tax offset for Australians earning up to $126,000 a year.

“The Government is more than doubling the low and middle income tax offset from 2018-19,” Mr Frydenberg said.

“Taxpayers earning up to $126,000 a year — including teachers, tradies and nurses — will receive a tax cut.”

The Coalition pledged to keep this tax offset available for the next four years – so long as they get re-elected. 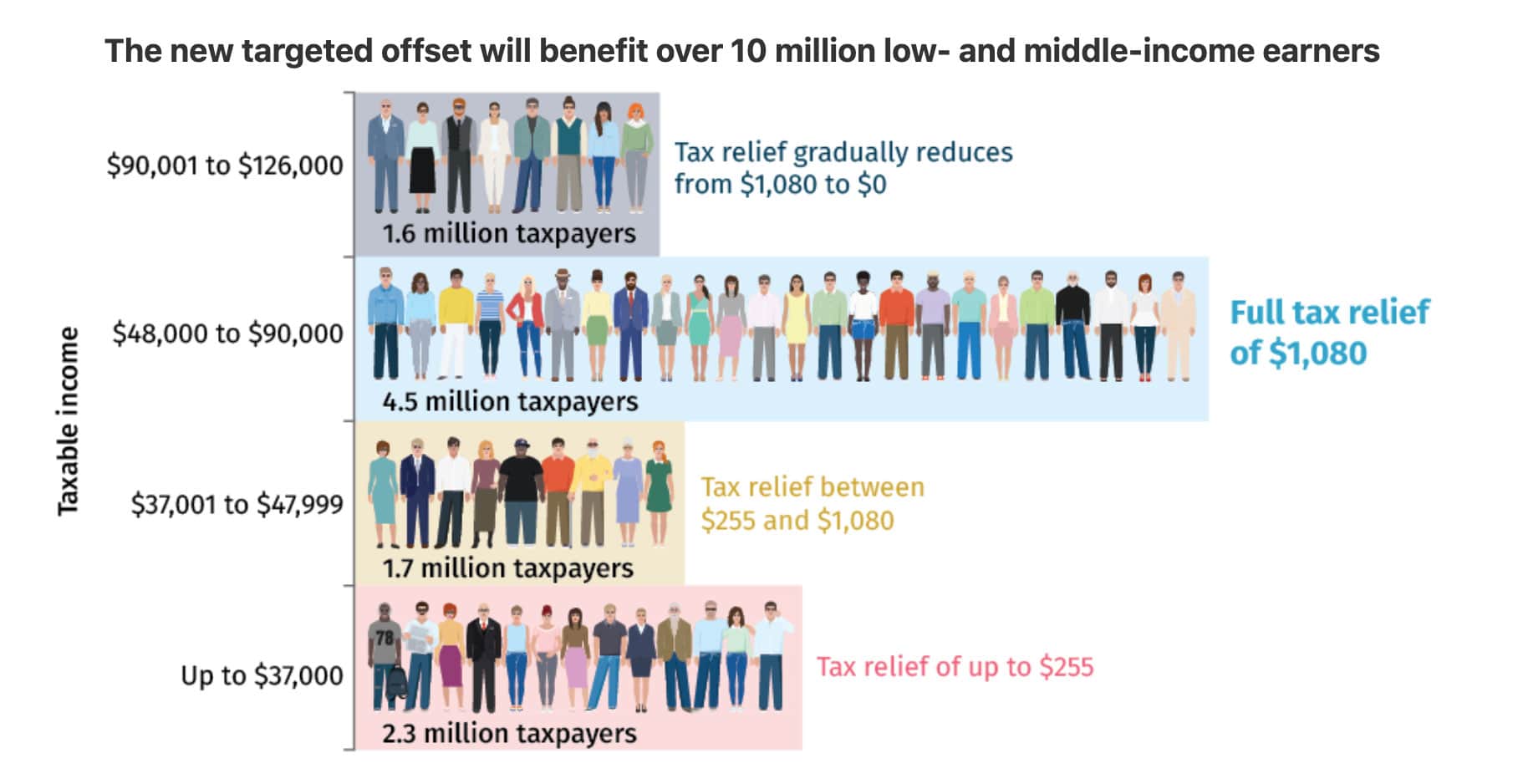 Another upcoming change for 2022 is the preservation of tax relief for low and middle-income earners.

Middle-income earners aren’t the only ones to get a tax rebate.

The Government also announced tax changes for the 3.4 million small to medium-sized businesses in Australia.

There are two key changes:

The Council of Small Business Organisations Australia (COSBOA) CEO Peter Strong gave the budget an 8.5/10 from a small business perspective.

“In any budget there are sometimes hidden gems and the funding of innovation games for small business is such a gem,” Mr Strong said.

“Small businesses bought together to innovate with the best talent emerging from our education institutions, rolled out on a national scale. Excellent focus on the future.”

Outlined in the Budget were three key changes to superannuation:

According to the Australian Institute of Superannuation Trustees (AIST) CEO Eva Scheerlinck, these “modest” changes won’t help most Australians build their nest eggs.

“The vast majority of members of profit-to-member superannuation funds will not benefit from these changes,” Ms Scheerlinck said.

“Most ordinary working Australians cannot afford to make extra contributions and can only dream of having the money to pour an extra $300,000 into their super fund in a single year.

“This budget is a missed opportunity to improve retirement outcomes for low income workers and the many women with broken work patterns who still retire with around half the super of men.”

The Government announced before the Budget’s release that nearly four million eligible social security payment recipients would receive assistance with their energy bill in the form of one-off, tax exempt payments.

Worth $75 for singles and $125 for couples, the one-off Energy Assistance Payment will be handed down to people such as parents, age pensioners, veterans, carers, and those on the Disability Support Pension before July.

Although not in the official budget papers, Newstart recipients will also receive these handouts.

There are those who believe this is a last-minute change from the Government after copping backlash for not making any substantial changes to Newstart allowances.

The initial decision to not increase the Newstart payment was described as “unnecessarily cruel” – Newstart recipients currently take home $538.80 per fortnight, while aged pensioners take home $834.40.

“People on Newstart shouldn’t have been excluded in the first place, and the one-off payment of $75 is a pittance compared to the high end tax cuts that mean more than $11,000 extra a year for people on more than $200,000 once they’re in place,” Ms Goldie told News.com.au.

“The energy bills will keep coming and this one-off payment of $75 will do nothing to support people to get through tough times while they look for suitable paid work.”

This Budget is the 25th in a row to refuse to deliver a real increase in Newstart.
The Government has once again turned its back on people on the lowest incomes. ACOSS Budget Media Release https://t.co/AMiNLMYeG9 #RaiseTheRate #KeepMyTaxCut #SaveOurServices pic.twitter.com/dbjDSyq0u2

Although this will have a less-immediate effect on people’s savings, the Government announced it would pump $550 million into banking regulators in response to the royal commission.

ASIC will get $400 million while APRA will get the remaining $150 million over the next four years.

$27.5 million to be spent on ant-related issues

In a matter that’s rather unrelated to personal finance, $27.5 million is set to be spent on ant control – specifically fire ants, Argentine ants and yellow crazy ants.

There’s not one, not two but THREE ant eradication plans in #Budget2019 pic.twitter.com/DCEZgWV4XH

In the writer’s personal opinion, we should be spending much more than $27.5 million on this – nothing less than the total eradication of these nightmare creatures will do.