Inflation rises 1.6% in September quarter, putting an end to deflation Australia's Consumer Price Index (CPI) has risen 1.6% in the September quarter, taking the country out of deflation.

The figures from the Australian Bureau of Statistics (ABS) come in just shy of the predicted 1.9% rise from economists.

It follows the record 1.9% fall in CPI in the June quarter, the biggest quarterly drop on record, which took the annual rate of inflation to -0.3%, only the third time it had been negative.

Head of Prices Statistics at the ABS Andrew Tomadini said the end to free childcare was the biggest driver of the rise in the CPI.

"In the September quarter child care fees returned to their pre-COVID-19 rate having been free during the June quarter," Mr Tomadini said.

"This was the largest contributor to the CPI rise in the September quarter. Excluding the impact of child care, the CPI would have risen 0.7%.

"Significant rises were also recorded in the September quarter for automotive fuel (9.4%) following a rebound in world oil prices, and pre-school and primary education (11.1%), with before and after school care no longer being free." 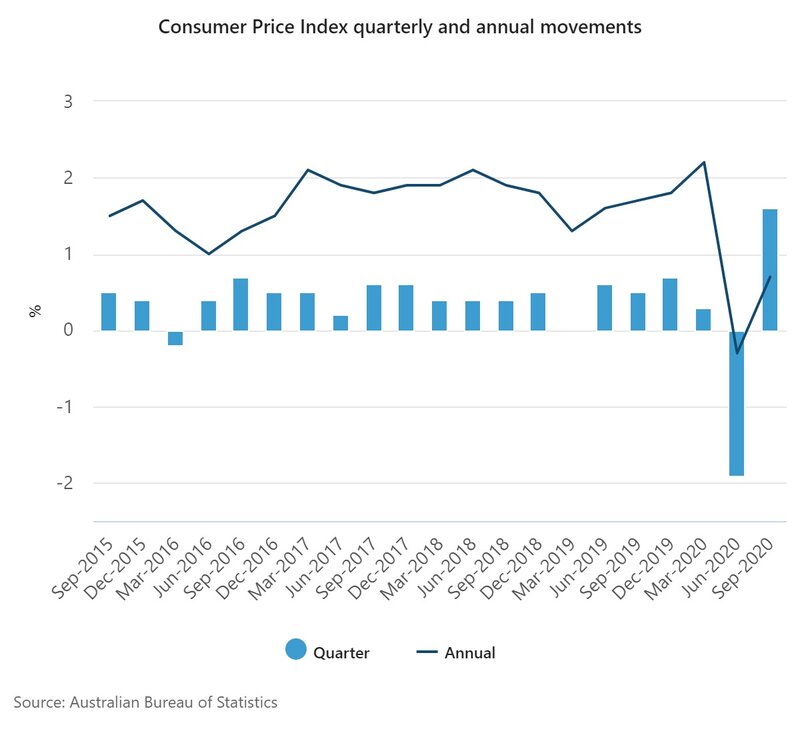 RBA forecasts country is out of recession

Speaking to Senate estimates yesterday, RBA Deputy Governor Guy Debelle forecast that the country was technically out of a recession, despite the difficult conditions in Victoria.

"At the moment it looks like the September quarter for the country probably recorded positive growth rather than slightly negative," Dr Debelle said.

A technical recession is defined as two consecutive quarters of economic contraction, which occurred when gross domestic product (GDP) contracted 0.3% in the March quarter and a record 7.0% in the June quarter.

Although technically out of recession, many people would argue the economy will be in dire straits for some time, with the national effective unemployment rate around 9-9.5% nationally and 14% in Victoria.

"The range of uncertainty around the numbers at the moment is as large as it has been in my career," he said.

The RBA deputy remained tight-lipped on whether we would see a November cash rate cut on Melbourne Cup day.

"We have a policy decision next Tuesday which is pretty market sensitive so I don't want to provide too much commentary around whether or not that will go ahead."

Economists are widely predicting the central bank will cut the rate by 15 basis points and take it to a new record low of 0.10%, as well as expanding its quantitative easing program.