Jobs decrease by 6%, young workers most affected by coronavirus fallout People under 20 have been hit hardest by COVID-19 closures, with jobs for the age group decreasing by almost 10% in three weeks.

The Australian Bureau of Statistics (ABS) released data outlining the impact of the pandemic on jobs and wages from 14 March to 4 April, the three weeks after Australia recorded its 100th confirmed coronavirus case.

“The largest impact of net job losses, in percentage terms, was for people aged under 20, for whom jobs decreased by 9.9%," Mr Davis said.

“Tasmania and Victoria had the largest decreases in jobs, down by 7.3% and 6.8%. 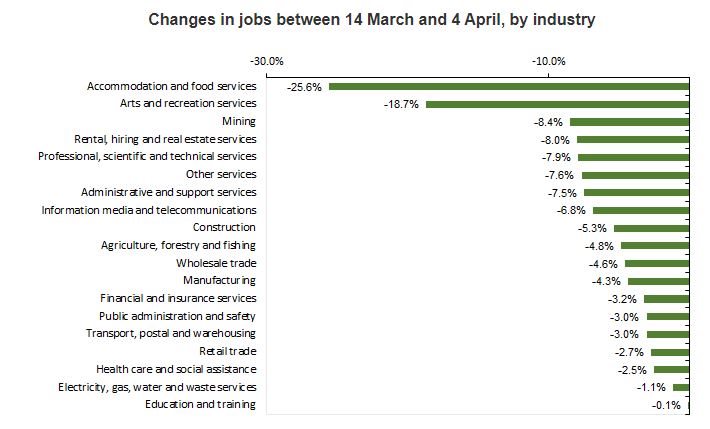 The data was recorded a short time after Prime Minister Scott Morrison announced the hibernation of the economy, shutting down pubs and restaurants, as well as introducing social distancing measures.

Those over 70 were almost as badly affected as young people, with employee jobs worked for the group down 9.7% for the same period.

Women were marginally more affected than their male counterparts, with employee jobs worked by women decreasing by 5.9% and 5.8% for men.

Total wages paid to women and men decreased by 7.0% and 6.4% respectively.

The ABS released unemployment figures last week, showing a marginal increase in the unemployment rate to 5.2%.

However the data was collected prior to the economic hibernation, not showing the full extent of job losses.

On Monday the ABS released figures from 1,059 households, studying the impact of social distancing and restrictions.

Although a much smaller sample size than the official unemployment figures, the data painted a distressing picture.

In the first week of April, 59% of respondents were working paid hours compared to 64% in early March, prior to the government restrictions.

That number accounts for more than 1.6 million people who went from paid work in early March to being unemployed by the first week in April.

That is on top of the 5.2% of people the ABS already found were unemployed, not to mention the 8.8% who were underemployed and looking for more work.

The underemployment figure is flawed in the same way the unemployment rate also is, and with millions of people who have lost employment and have turned to the JobKeeper scheme, expect that number to sharply rise.

The ABS said over half (60%) of those with a job who worked less hours in the first week of April because of COVID-19 said it was due to a reduction in the amount of work available, whilst 15% said it was because they were stood down by their employer.