Research from NAB has found 40% of Australians have experienced some form of financial stress or hardship in the past three months.

According to the NAB Australian Wellbeing Survey for Q4 2019, this is the highest number of financially stressed Australians since Q4 2016, and an increase from 36% in Q3 2019.

Not having enough money for an emergency was the most frequently cited cause of financial stress, with the number affected by this rising from 20% to 23% quarter-to-quarter, followed by being unable to pay bills (19%), having enough for food and essentials (16%) and paying medical bills (11%).

Only 4% of respondents said they were stressed by paying their mortgage, which is interesting considering high levels of mortgage stress reported by other institutions.

Overall wellbeing declined in the final months of 2019 after rising throughout the year, falling by 1.7 points to a below average 64.3. 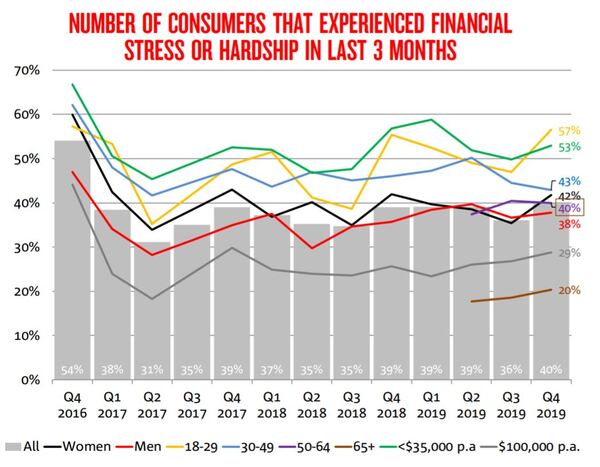 There were some key differences in financial stress experienced by different genders and age groups.

The table below shows the complete breakdown of the differences in financial stress reported by the different ages, genders and income levels.

NAB’s Financial Anxiety Index - showing the level of concern over future spending and savings plans arising from someone's current financial position - rose again to 58.8 in Q4, after rising from 56.3 to 57.8 from Q2 to Q3.

However, anxiety is down from 63 out of 100 from Q4 the previous year.

The main driver of financial anxiety last quarter was the ability to finance retirement, with 55.4% of respondents listing it as a concern.

Other key drivers of anxiety included:

Being able to raise $2,000 in an emergency (46.1%) came in fifth, and was one of only three concerns that increased over the quarter, alongside financing retirement and meeting monthly household bills (43.4).

Australians were least worried about being unable to meet their minimum credit card repayments (34.7%) or having enough money for food and necessities (37.8%). 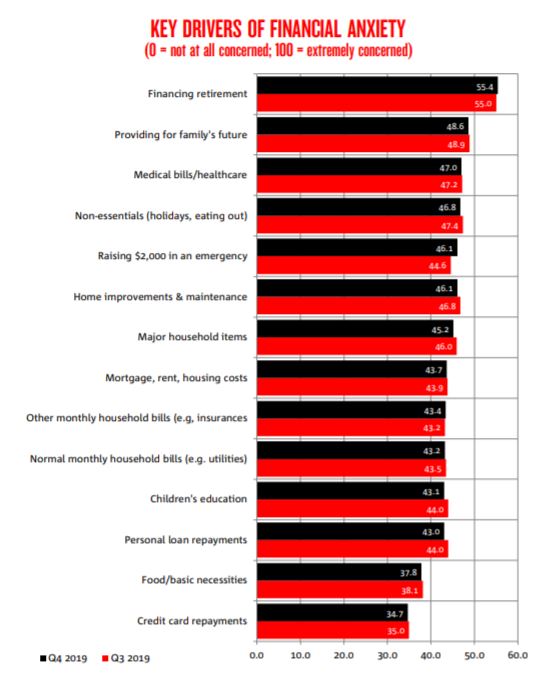 The new gap of 3.7 between men and women's financial anxiety is at the highest level it's been for more than 12 months.

Again unsurprisingly, high income groups had much lower anxiety levels than low income groups (51.9 vs 67.2), while the oldest age group, 65+, also had the lowest score at 47.0.

NAB Group Economics has also forecast a modest increase in January's retail trade figures from the Australian Bureau of Statistics, despite these higher levels of financial anxiety.

NAB's Cashless Retail Sales Index forecasts a 0.2% month-on-month rise following a 0.5% fall in December (before which NAB predicted a fall of 0.2% revised).

According to NAB, the underlying trend remains one of "generally weak retail spending, reflecting a consumer burdened by high debt and slow wage growth", and unless these are remedied, "it is unlikely that the retail sector will see a sustained uplift".

"Last month we flagged that the bushfire season could damage consumer confidence in early 2020. While the fires have been absolutely devastating in many areas, they do not appear to have seen large second round consumer confidence impacts for capital city retailers," Mr Oster said.

"Coronavirus has badly dented Chinese GDP growth and will be a headwind for Australia in Q1...combined with bushfires, is likely to lead to a small negative GDP print for Q1 2020.

"We assume – and hope – that most of the bushfire and coronavirus downside will have passed by Q2. Nonetheless, we do not expect much stronger consumption growth until 2021."