No pay rise for Aussies in eight years Photo by Campaign Creators on Unsplash

The Melbourne Institute’s annual Household Income and Labour Dynamics (HILDA) report shows the median disposable income for households (adjusted for inflation) actually fell by 0.76% from 2009 to 2017, equivalent to $542.

The mean household income (aka the average) rose by 3.48% in this time.

The median figure is a better representation however, as the mean figure is skewed somewhat by outlying high-income households.

While income growth has stagnated in the last near-decade, it was moving much faster in the years prior to the global financial crisis (2009).

“When we look at overall measures of household income, we see that the broad trend in terms of income levels is stagnation,” the report’s co-author Roger Wilkins said.

“We’ve seen very little change in the median income of someone in the middle, which has basically remained unchanged since 2012. That was on the back of very substantial rises, particularly in the mid-2005 to 2009 range.”

So while Australia’s economy may have escaped the GFC relatively unscathed compared to others, it would appear flatlining wage growth has been a consequence.

Professor Wilkins also said the fact that the mean income level had risen by more than the median means higher income earners were fairing better than the average.

“The income rises must be at the very top because the top quintile [the top 20 per cent of income earners] did not move much, so it must be the top one per cent that is going up,” he said.

According to the ABS’ Survey of Income and Housing (SIH) earlier this month, there’s been an increase of $28 in average weekly household income over the past decade, while for high-income households there was an increase of $57.

Female breadwinners on the rise

Among the many many things found in the HILDA survey is a noticeable growth of dual-income couples where women could be regarded as the ‘primary breadwinner’.

Over the past 17 years, the share of couples where the woman earns more than her partner has risen from 22% to 25%.

However, the report found households with primary female breadwinners tend to be lower-income in general.

“Situations in which the female is the primary source of household income tend to be more short-lived than the male breadwinner arrangement,” Professor Wilkins said. 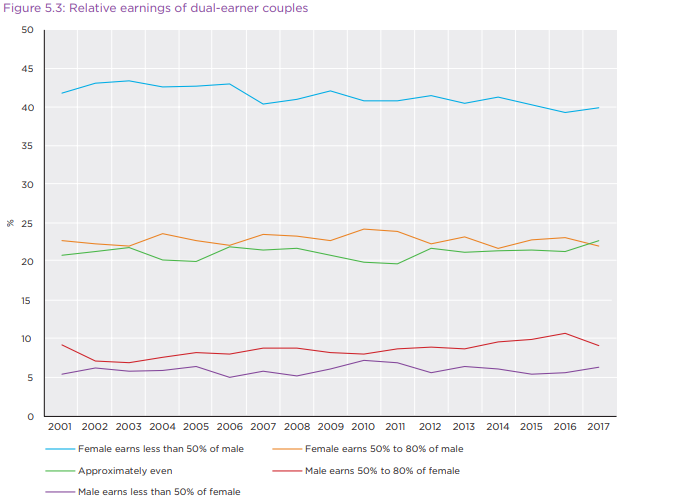 Overall, the latest female employment figure for 2017 sits at 71.4%, which is the highest it’s been since this report began in 2001.