A new report has detailed options on how to close the gender gap in superannuation balances.

KPMG Australia outlined four ways to compensate a primary carer for superannuation "lost" while at home caring for children, which it found was usually a woman.

The consulting firm proposed a rebate on the 15% Superannuation Contributions Tax (SCT) paid on contributions made for up to five years following a period out of the workforce.

KPMG provided a case study below, with PCP referring to the Primary Carer Period (PCP) - when a person is caring for one or more children younger than six, or caring for a child younger than 16 who has a disability. 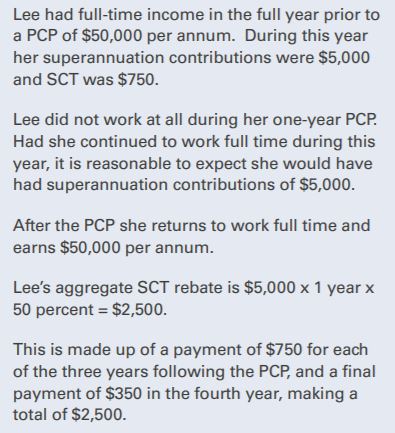 Linda Elkins, KPMG Partner and National Sector Leader Asset & Wealth Management, said the rebate would incentivise the carer to resume at least the same level of work as what they had before leaving employment.

"This approach could help close the gender super gap in a significant way," Ms Elkins said.

"The aim is to support the primary carer in catching up to the extent of a maximum of 50% of the contributions that might reasonably have been made, had they continued to work as they did before leaving the workforce."

KPMG also suggested Federal Government funded top-up super contributions, which could be directed to accounts of those accessing the Paid Parental Leave scheme.

The report noted even a small boost to a primary carer's super balance could make a huge difference, and called on Treasury to model the impact of a $500 or $1,000 payment.

What is the superannuation gap between males and females?

According to KPMG, the gender superannuation gap can be anywhere from 22% to 35% in the years approaching retirement age.

Alison Kitchen, Chairman of KPMG Australia, said the report found individuals with low super balances were more likely to rely on the age pension in retirement.

"Our broad commitment is to help change that situation for the better by working with stakeholders to support targeted policy reform."

Other options suggested in the report included the creation of a Primary Carer Supplementary Concessional Cap, and the removal of the five-year limit on utilisation of concessional contribution caps relating to the PCP.

Currently, an individual can have concessional contributions of up to $27,500 per annum, and a taxpayer with a total super balance of less than $500,000 on 30 June of the previous financial year can apply any unused cap for up to five subsequent years.

The report suggests primary carers would benefit from having additional "catch up" capacity as their earnings may not increase sufficiently in the five years following the PCP to make additional contributions before the period expires.

Photo by Alexander Dummer on Unsplash