Home / Compare Savings Accounts / Superannuation early withdrawal not as bad as you might think: Grattan

Superannuation early withdrawal not as bad as you might think: Grattan The government's super early access scheme has attracted its fair share of criticism since it was announced, but one new report says it may not be as bad for people's retirement as it's made out to be.

New Grattan Institute modelling shows many Australians can still have a comfortable retirement even if they have withdrawn from their super.

The public policy think tank reports that the typical worker would still see a fall in their retirement income, but by only 1%, if they took out the full $20,000 allowed under the scheme.

According to the Grattan Institute's program director for household finances, Brendan Coates, a typical (median income) 35 year old who withdraws the full $20,000 would see their retirement balance fall by around $58,000, but their actual income over retirement would fall by only $24,000 - about $900 per year.

This is because the pension means test means that the government, via higher pension payments, makes up much of what’s lost.

"Put another way, in retirement that worker would earn 88% of their pre-retirement income instead of 89%," Mr Coates said.

"Both are well above the 70% post-tax replacement benchmark used by the Organisation for Economic Cooperation and Development and the Mercer Global Pension Index to determine how much is needed in retirement.

"Workers on median incomes who withdraw the full $20,000 will remain well above that benchmark, even with compulsory super contributions staying where they are, at 9.5% of salary." 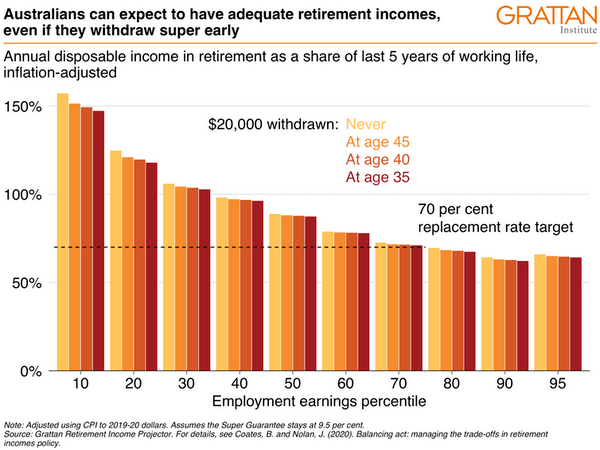 However, the report does note that the very lowest income workers (as well as the highest) will receive less extra pension to compensate, and will have less of a cushion.

The graph shows that many low-income workers will receive a pay rise when they retire, even if they withdraw the full $20,000 from super.

"Of course, some low-income Australians remain at risk of poverty in retirement – especially those who rent. They struggle even more before they retire," Mr Coates said.

"Boosting rent assistance would do far more to help them than would higher compulsory super contributions, and would do less to make them poor while working."

For middle-income earners though, Mr Coates said the government will mostly underwrite the majority of their lost income from super via the age pension anyway, assuming the age pension still exists in its current form when a 35-year old eventually retires.

The Government's scheme, announced in late March, has given Australians financially affected by COVID-19 the chance to withdraw up to $20,000 from their super - and many have done just that, even if they weren't actually eligible for the scheme.

The most recent figures from the Australian Prudential Regulation Authority (APRA) revealed over $30 billion had already been drained from super accounts by nearly four million people, smashing original government forecasts and is expected to reach $42 billion.

Nearly 400,000 young Australians - those under 35 - have completely eroded their super balance to $0, according to research by Industry Super Australia (ISA), while as many as 40% of those who accessed their super saw no drop in income.

Many of the super withdrawals, which average out at around $8,000, have been spent on discretionary items like gambling, alcohol, new cars and boats, and even gambling.

[Read: How to catch up if you've withdrawn your super early]

For all of these reasons and then some, the scheme has attracted criticism, including from the likes of former Prime Minister Paul Keating.

"Of the income support in Australia to date during the COVID crisis, $32 billion has been found and paid for by the most vulnerable, lowest-paid people in the country," Mr Keating told a webinar hosted by Industry Super Australia.

"The main burden of income support is people ratting their own savings."

ASIC meanwhile released a new super withdrawal estimator calculator, showing that if you were to withdraw the first $10,000 in your twenties, you could be up to $25,000 worse off by the time you retire (assuming a retirement age of 67).

No need to increase the rate of super guarantee

Grattan's report also highlighted the need to keep the current rate of superannuation as is at 9.5%, instead of the planned increase to 12% starting from next year.

"COVID provides another reason. Previous Grattan work has shown that higher super comes at the expense of future wage increases.

"It’s a conclusion the Reserve Bank has also reached."

Mr Coates also said that raising the super guarantee rate would not only lead to lower wages but would also cost the federal budget an extra $2 billion per year in extra super tax breaks, which largely benefit wealthier Australians and not those on lower incomes.

"Increasing compulsory super contributions in the midst of a deep recession would slow the pace of recovery," he said.

"And that would be bad news for all Australians, regardless of how much we end up with in super."

But Assistant Superannuation Minister Jane Hume says the government has no plans to backflip on increasing the super guarantee.

"It's not on the government's agenda, we've no plans to change the superannuation guarantee," she said.

"We've had a very diverse range of advocates speaking up against the super rise, everybody from the Reserve Bank through to the Australian Council of Social Services.

"So it may be law, it may be legislated, but of course it's going to be a controversial decision to maintain the rises."