Photo by Fabian Mardi on Unsplash

Card spending in Victoria is lagging behind the rest of the nation as a result of their virus outbreak.

Commonwealth Bank (CBA) revealed household card spending over last week eased to be 7.2% higher than a year ago.

Online spending was down the most for the week after a strong lift in the previous, and growth in spending on both goods and services also fell.

"The reimposition of restrictions in some parts of Victoria is impacting the headline numbers," Ms Clifton said.

"Spending momentum in Victoria has turned negative as the number of COVID-19 cases lifts sharply and restrictions are reimposed."

Only the Northern Territory saw an uptick in card spending, with the Victorian pandemic outbreak potentially dampening sentiment in the rest of the nation. 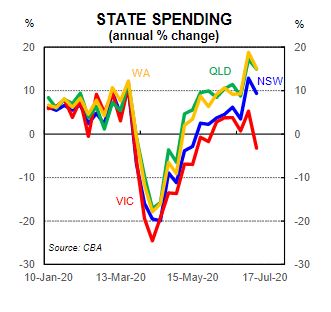 Ms Clifton said spending in Victoria was lagging behind the national average for some of the categories most affected by restrictions and lockdowns.

"Victoria is also lagging behind on spending on recreation. Many entertainment venues have been forced to close again as stage 3 restrictions are reimposed.

"Transport spending in Victoria is also lagging behind the national average. No doubt the tighter restrictions and lockdowns are having an impact on transport spend."

CBA found education spending had been weak across the country, especially in Victoria, with the decision to delay the start of Term 3 meaning households may not have yet paid school fees.

Spending on food was growing at a similar pace nationwide, despite cafes and restaurants back to takeaway only in Victoria.

Concerns have mounted over a second wave in New South Wales (NSW) and Queensland, after 21 cases were linked to the Crossroads Hotel at Casula.

The number of patrons allowed in pubs across in NSW is expected to be slashed, with bookings of more than 10 restricted, and larger venues limited to no more than 300 patrons.